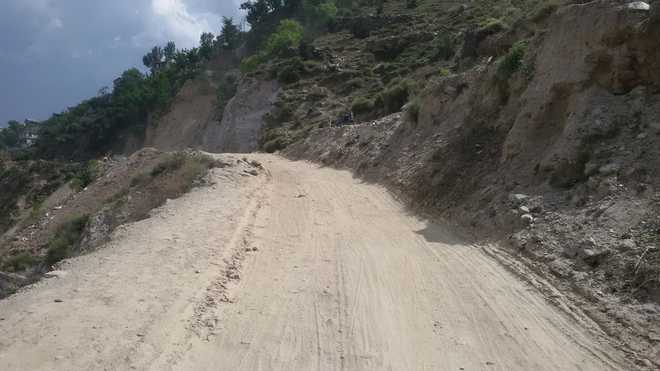 JAMMU, Aug 30: Unbelievable it may sound but it is a fact that Roads and Buildings Department and Jammu and Kashmir Projects Construction Corporation have constructed only 2.90 kilometres road length in mountainous Doda district as against the target of 56 kilometre under three Central Road Fund schemes during the past over one decade that too after expending an amount of over Rs 70 crore.
However, the Government has not taken any serious note of slackness on the part of these agencies as a result of which vast population has remained deprived of benefit of financial assistance provided by the Union Government.
Official sources told EXCELSIOR that during the financial year 2007-08 the Union Government sanctioned three roads under Central Road Fund (CRF) for connecting several villages of Doda district with the nearest sub-divisions so that people don’t face inconvenience in approaching the concerned authorities for redressal of their grievances pertaining to different sectors.
These roads—Changa to Kaljugasar, Gandoh to Jaie and Bhatyas to Manu were to be constructed at a total cost of Rs 83 crore and the entire sanctioned money was released to the Roads and Buildings Department by the Union Ministry for utilization in the execution of work that too in a time bound manner.
However, Roads and Buildings Department decided to partly allot some work to the Jammu and Kashmir Projects Construction Corporation (JKPCC) and accordingly task of construction of 43.5 kilometres road length out of total 56 kilometres was assigned to JKPCC.
As per this decision, an amount of Rs 73.78 crore was supposed to be released to the JKPCC for smooth and timely construction of 43.5 kilometres road length. However, R&B Department released only Rs 50.47 crore to the Corporation without assigning any reason, sources informed.
Shockingly, the head office of JKPCC released only Rs 38.71 crore to its Deputy General Manager in Doda for construction of roads as against Rs 50.47 crore received from the Roads and Buildings Department.
After some years the field officials of JKPCC informed the head office about utilization of Rs 38.71 crore and demanded remaining amount for going ahead with the road construction work, sources said. However, this demand has not been considered till date as JKPCC head office has reportedly diverted around Rs 12 crore out of the total funds released by the R&B Department for these three roads to other districts without any justifiable ground, sources added.
Even R&B Department chose not to give remaining amount of Rs 23 crore to JKPCC on the ground that it (R&B Department) utilized the remaining share of JKPCC component to meet its own cost overrun, they further informed.
Due to this, only 2.90 kilometre road has been constructed in all respects against the target of 56 kilometre during the past over one decade by these two agencies of the Government that too even after expending over Rs 70 crore, sources said, adding “the fate of these three roads is a big question mark on the performance of R&B Department and JKPCC”.
These facts were brought to the notice of the former Governor N N Vohra during his visit to Doda district on August 4, 2018 but till date no action has been taken by the administration as a result of which fate of these three roads is still hanging in balance, sources said.
“It is pity that R&B Department and JKPCC have failed to provide intended benefit of Centrally Sponsored Scheme to the people even after making an expenditure of over Rs 70 crore”, they said, adding “it is required to be ascertained as to whether the expenditure shown on the papers by these two agencies has actually been made on the ground”.
Another shocking aspect is that elected representatives of the people from Doda and Bhaderwah never tried to play their role in release of remaining funds and completion of work on these three roads during last over one decade and continued to watch the situation as mute spectator, sources remarked.