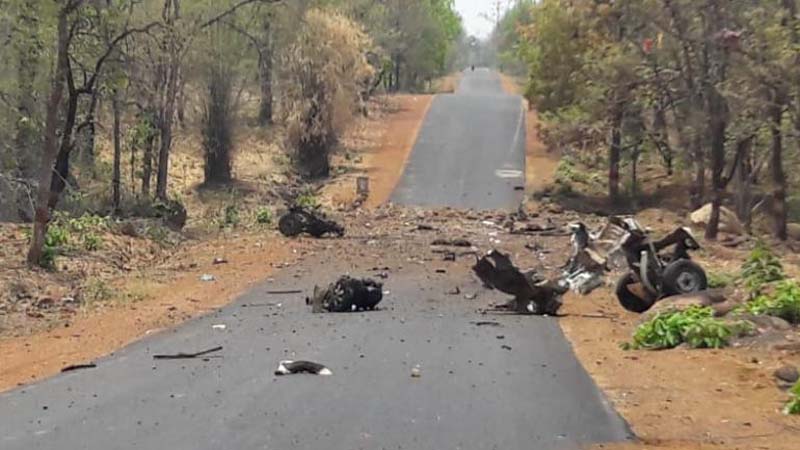 MUMBAI, May 1: Sixteen persons, including 15 policemen, were martyred today after Naxals blew up their vehicle in Maharashtra’s Gadchiroli district, officials said.
The IED blast, whose impact left a large crater on the road, came hours after Naxals torched 27 vehicles belonging to a road construction company earlier in the day, police said.
The driver of the vehicle was among those killed in the blast which took place as the vehicle reached Lendhari nallah in Kurkheda area, a police official said.
All the policemen killed were members of the Quick Response Team of Gadchiroli police, which was on way to inspect the torched vehicles, the official said.

Click here to watch video
In Mumbai, Maharashtra Director General of Police Subodh Kumar Jaiswal told reporters that the Naxal attack was not a result of intelligence failure.
Terming it a big loss for the police force, Jaiswal said police were ready to give a befitting reply to the Naxals.
NCP chief Sharad Pawar and State Congress president Ashok Chavan sought Maharashtra Chief Minister Devendra Fadnavis’ resignation on the issue.
Fadnavis holds the home portfolio and he should step down immediately, Pawar said. “Those who feel shame of conscience if not shame of public opinion would have resigned.
But the people who are in power today are not going to do so,” Pawar tweeted.
Naxals activities in the State were growing, Pawar said, adding it was the result of “rulers neglecting law and order situation in the Naxal-affected areas”.
State NCP chief and former Maharashtra Home Minister Jayant Patil said the Naxals deliberately struck on the State’s foundation day.
BJP Minister Vinod Tawde accused Pawar of playing politics over the attack. “Pawar is talking on the lines of Naxals,” he added.
Fadnavis condemned the Naxal attack, stating that the Naxal menace will be fought with stronger efforts.
“Anguished to know that our 16 police personnel from Gadchiroli C-60 force got martyred in a cowardly attack by Naxals today. My thoughts and prayers are with the martyrs’ families. I am in touch with the DGP and the Gadchiroli SP,” he said in a statement.
Maharashtra Governor Ch Vidyasagar Rao cancelled the reception and cultural programme organised at the Raj Bhavan in south Mumbai following the Naxal attack.
The reception was cancelled as a mark of respect to the police personnel who lost their lives in the Naxal attack in Gadchiroli district, a Raj Bhavan spokesperson said.
In what was then termed as the biggest success in the anti-Naxal operations, 37 Naxals, including 19 women, were killed in Gadchiroli district in April last year. (PTI)