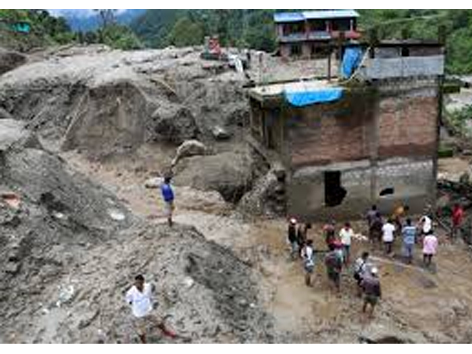 KATHMANDU, July 10: At least 12 people were killed and 19 others missing in multiple landslides caused due to incessant rains in western Nepal, police said on Friday.
Seven people, including three children, lost their lives due to landslides in Sarangkot and Hemjan areas of Pokhara city in Kaski district.
Five of them were killed after a landslide swept away a house in Sarangkot area in Pokhara in the wee hours of Friday, police said.
Around 10 people were injured in the same incident and are undergoing treatment at different hospitals, they said.
In two separate incidents of landslides on Thursday night, three members of a family were killed in Besishahar of Lamjung district and two others lost their lives in Aathbiskot area of Rukum district.
Meanwhile, 12 people went missing after two houses were swept away by a landslide in Jajorkot district.
Seven people were untraceable after their house was wiped out by a landslide in Myagdi district.
Meanwhile, a landslide that occurred in Jogimara area has obstructed the Prithi Highway in western Nepal.
Narayani and other major rivers in the country have swollen due to the continuous downpour for the last 48 hours.
Meteorological Department has forcast that the monsoon rains will last for another three days. (PTI)