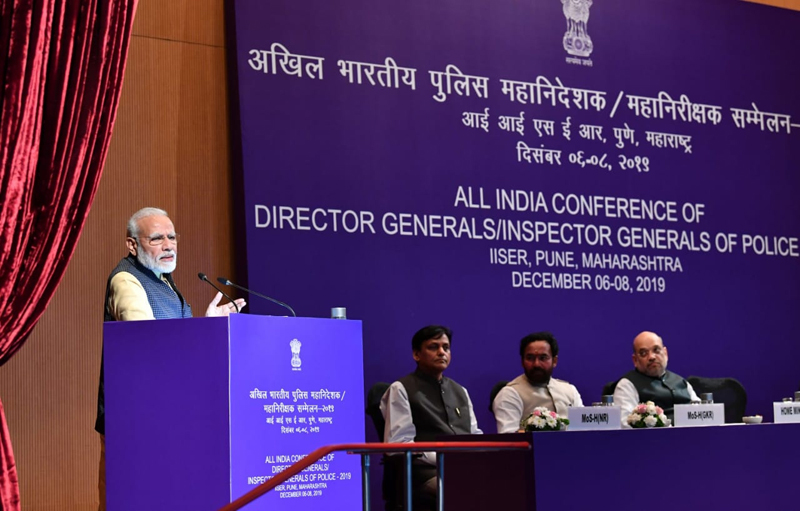 Sanjeev Pargal
JAMMU, Dec 8: Border protection, linkages of terrorism and narcotics, threat of radicalization and security issues dominated 54th DGP/IGPs conference at Pune in Maharashtra which was attended among others by Prime Minister Narendra Modi, Union Home Minister Amit Shah, National Security Advisor (NSA) Ajit Doval and Union Home Secretary AK Bhalla.
An official statement released by the Union Ministry of Home Affairs on last day of three days conference said the meeting deliberated on a gamut of policing and security issues including border protection, the linkage of narcotics and terrorism, upgradation of forensic capability, threat from radicalization in the digital era and evidence based policing.
“While specific cases were highlighted, roadmaps for implementation of key recommendations were also framed,’’ the statement said.
Eleven Core Groups were formed in the conference for holding brain storming sessions on key aspects of internal and external security such as terrorism, Naxalism, coastal security, cyber threats, combating radicalization and narco-terrorism etc.
Terrorism and radicalization posed major threats in the Union Territory of Jammu and Kashmir though they have been contained to some extent post abrogation of special Constitutional provisions of the erstwhile State and its bifurcation into two UTs.
In his address to the conference, as per another official statement, the Prime Minister appreciated the meticulous efforts made by the country’s police forces for maintaining general peace and tranquility in the country and ensuring normalcy and said they must not forget the contribution of their families who firmly stood behind them.
“At all time, they must strive to improve image of the police force to inspire confidence amongst all sections of society including women and children,” he said emphasizing the role of effective policing in making sure that women feel safe and secure.
Modi urged the Heads of Police departments to carry forth the spirit of the Conference to the lowest level-from State to district to the police station (thana). After listening to the presentations given by different State police forces, he mentioned that a comprehensive list of best practices could be prepared and adopted by all the States and Union Territories.
“Technology provides us with an effective weapon to ensure pro-active policing that factors-in the feedback of the common man,’’ he said.
The Prime Minister recognized the pulls and pressures confronting the police officers in the day to day discharge of duties. However, he said, that whenever they are in doubt they should remember the ideals and the spirit with which they appeared for the civil services exams and continue to work in national interest, keeping in mind the welfare of the weakest and poorest sections of society.
In his address at the conference, Union Home Minister Amit Shah asserted the NDA Government’s resolve to amend the IPC and the CrPC to make them more conducive for the country.
Shah’s statement came days after the Ministry of Home Affairs asked all State Governments to send their suggestions for undertaking a major overhaul and recasting of the Indian Penal Code (IPC) and the Code of Criminal Procedure (CrPC) so that it will reflect the aspirations of a modern democracy and provide for speedy justice.
“The Home Minister underscored the Government’s resolve to initiate changes in the IPC and CrPC to make them more conducive to today’s democratic set up”, an official statement said.
Shah announced the Central Government’s plans to set up an All India Police University and All India Forensic Science University, with affiliated colleges in the States.
He termed the annual conference a ‘Vaicharik Kumbh’, wherein the top policemen of the country come together on one platform and formulate policy decisions pertaining to national security.
Shah appreciated the police forces across the country for their good work and paid homage to police martyrs.
As part of the Prime Minister’s vision for bringing policing closer to people, since 2014, the DGPs/IGPs conference has been taken to various parts of the country including Guwahati (North East), Kevadia (Gujarat) and Tekenpur (Madhya Pradesh), in the past.
The format of the conference has also undergone significant changes in terms of duration and presence of the Prime Minister and the Union Home Minister.
Prior to the conference, Committees of DGPs are established to formulate the contours of presentations, which are on contemporary security threats. Additionally, during the conference, break-out sessions were held to further refine policy issues, the MHA’s official statement said.