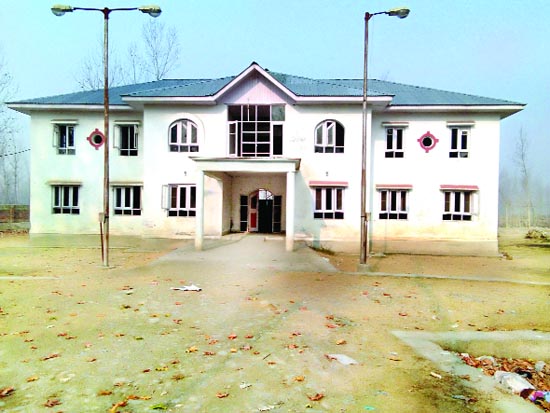 Suhail Bhat
SRINAGAR, June 25: It has been 10 years since the construction work on New Type Primary Health Centre at Akhran in South Kashmir’s Anantnag district was started but the facility remains incomplete.
The locals blamed that the project was marred by an alleged political indifference towards the people of the area while as authorities maintained that scarcity of funds slowed the pace of work.
Officials at the Health Department said the construction work on the building was complete but it was hit by flood before being thrown open for the health care facilities. “The building was badly damaged in floods before the Housing Board, the executive agency would have handed it over to us. Now, the building is in bad shape and needs renovation before making it functional,” they said, adding the building has not been handed over to the Health Department.
The locals of the area said nearly 10 years have passed since the Government announced the much-needed health centre in their area but political indifference has put the whole initiative in tatters. “The main construction work on the building is complete but the Government has failed to make it functional. It was inaugurated in the year 2008 but it’s still incomplete”, Ghulam Mohammad Shah, a local said.
He further said that Government’s failure to complete the construction work within stipulated time has irked the locals, who feel administration was indifferent towards the problem they face in availing the health services. “The gaps in the implementation of the program are visible but none is ready to accept the failure,” the locals said.
They said the locals of the area have repeatedly raised the issue with the authorities but their pleas went unheard.  “We are unable to fathom reasons behind this political indifference. Presently, the people of more than a dozen villages have to travel seven-eight kilometers for basic health care. We are unable to fathom reasons behind this political indifference,” added the locals.
While divulging details about the project, an official at the Health Department said the health centre was taken up for execution in 2008. “With an estimated cost of nearly Rs 1.80 crores, the construction work on the two-storey building was subsequently started”, he said.
Chief Medical Officer Anantnag, Fazil Kochak, told Excelsior that the building was damaged in the devastating floods of 2014 and the proposal for its renovation has been sent to the concerned authorities. “The building has suffered substantial damage due to floods. The windows and doors are broken and the flooring has also suffered damages. We recently visited the hospital and took stock of the situation,” he said, adding once the proposal for the renovation gets approved the work would be taken up.