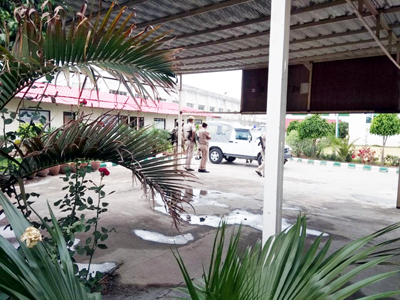 Gopal Sharma
JAMMU, Apr 20:  Police and Forest joint team raided three Khairwood units in Kathua and Samba and seized Khair-wood worth crores and also some record today.
Official sources told the Excelsior that on the basis of specific inputs regarding massive felling of Khair trees and dumping of Khairwood in these units in sheer violation of Supreme Court directive  and  State Government guidelines,  the three police teams, assisted by  a Magistrate  and some Forest officials,  today conducted raids at M/s Jammu Industries  at Phase-II SIDCO Samba; Trikuta Katha Industry, Govindsar in  Kathua  and Natural Industries, Govindsar, Kathua today and seized relevant record and felled Khairwood worth crores.
The sources said that owners of the unit at SIDCO Samba, said to be Khalil-ullah from UP and one Ms Halala from J&K have gone underground  and the team quizzed the staff there and seized record and a large quantity of  Khairwood worth cores. Khalil is said to be a prominent leader of Samajwadi Party in Uttar Pardesh.
The joint- team also simultaneously raided units – Trikuta Katha Industry, Kathua owned by one Subhash Malgooria  and  Natural Industries, Kathua owned by Mr Aggarwal. In all the three factories, a local prominent politician from Kathua has partnership.
Police was investigating the role of concerned DFOs, CFs and CCF in connection with the felling of green gold in violation of SC directive, creating massive dumps  in Katha factories and forcing local farmers to sell their produce at the throw away price of just Rs 800 to Rs 1000 per cubic ft despite the fact that  rate of Khairwood is Rs 4500 to Rs 5000/ cubic ft in the market.
The DFOs concerned were not issuing Farm 25 to the farmers  for the transportation of  Khairwood by adopting blackmailing tactics at the behest of  a local politician, having his own business interests in these units. Not only  Kathua and  Samba, massive felling has been reported from  Jammu, Reasi, Nowshera and Udhampur  Forest Divisions.
PCCF J&K,  Manoj Pant when contacted said that he was not aware of the details regarding raids but maintained that police had contacted him to provide technical assistance in connection with raids  and sought services of some Forest officers. Accordingly, he deputed a few Forest officers for the operation by police. He denied having any knowledge about the details.
A senior Police Officer, however, when contacted said that three police teams were constituted by involving some district level police officers. With the assistance of Forest technical staff and  three Magistrates, the raid was conducted at three Katha units at Kathua and Samba.
He said police had inputs regarding sheer violations by these units  and  raid was conducted simultaneously at these units. He said 11 licenses were issued by the Forest department on pick   and choose basis, by adopting blackmailing tactics and farmers  were denied the market rates and monopoly had been created by a few unit holders in connivance with the Forest staff.
He said FIRs have been registered in this connection and further investigation was in progress. The record seized is being scrutinized and arrests may take place any time.