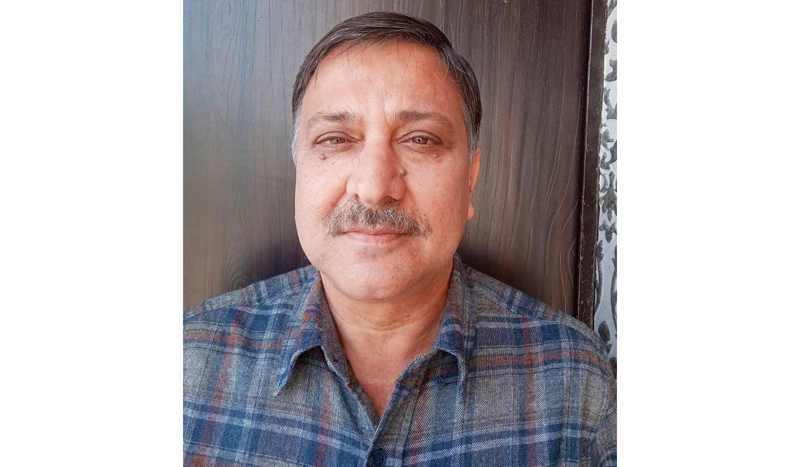 Sanjeev K Sharma
JAMMU, Nov 24: Water crisis in rainy season has become a chronic problem in Ward number 25 of Jammu Municipal Corporation (JMC) as filtering at Sitli Plant in Nagrota in those months gets affected by the accumulation of silt every year.
This was informed by Arun Khanna, JMC Councillor from Ward 25 who also said that he wrote to the JMC Commissioner for a big water storage tank at Christian Graveyard in the Ward to overcome such water crisis but there was no progress in this regard due to lack of funds and the official red tape at JMC offices.
In an exclusive interaction with the Excelsior, Khanna, who politically belongs to BJP and is a second time Counicllor (earlier he was elected from Ward number 24) said that areas in his Ward include Bharat Nagar, Vikram Nagar, Kuttiya Wali Gali, Shishu Smadhis, some portion of Sarwal, Sarwal Hospital, Police Post Sarwal, Hari Mandir and Arya Samaj Mandir Kotli Colony Rehari.
He said that there is only one parks in the Ward-Master Devi Chand Municipal Park which is visited by many people especially morning and evening walkers.
“The Park needs immediate facelift as it is an old Park and a landmark in the area. It has an open air gym with almost all the equipments in damaged condition which needs proper repair or complete replacement,” he maintained adding: “The Park also needs whitewash-paint work, proper gates, steel benches, steel dustbins, new tiled path etc but as there is shortage of funds, this much needed development has been badly affected.”
It is pertinent to mention here that the elected body of JMC responsible for developments in JMC Wards has completed over four years of its mandatory tenure of five but many development works are still miles away from completion and in some cases such works have not even taken off.
The JMC Councillor said that sewerage work in the Ward is almost complete barring a few connections and the Kuttiya Wali Gali has not been repaired so far while 95 per cent of lanes and drains in the remaining Ward have been properly constructed and repaired.
“There are two big Nallahs (big-deep drains) at Shishu Smadhis and at Bharat Nagar area of the Ward on which no repair work has been done so far due to lack of funds,” he claimed.
Khanna further said that his Ward has been provided with 25 Safai Karamcharis while there is a need of 30 but still it is a clean Ward despite the shortage of Safai Karamcharis.
He also said that permanently parked vehicles at Bharat Nagar, near Police Post and near the Park in his Ward makes cleaning of that area tough.
The Councillor said that the autos moving from door-to-door to collect the garbage are doing a good job in garbage disposal and now the garbage dumps and dustbins are rarely seen in the Ward.
“However, the garbage dump near Sarwal Hospital is a big problem and the garbage is thrown there by the people and Safai Karamcharis of Ward 18. I request those people to stop this and use services of garbage collecting autos,” he said.
“Fogging in the Ward is being done in routine while Smart Meters have also been installed in the Ward without any protest or resentment,” Khanna said.
He informed that there are two graveyards in his Ward-one for Muslims and the other for Christians and both these places of burying the dead people need developmental works which could not be done so far due to paucity of funds.
“There are Shishu Samadhis (graveyard for children) in the Ward where some developmental work has been done,” the Councillor further said.
He informed that his Ward also faces the problem of stray animals like dogs and cows wherein the stray dogs have created a panic in the Ward.
“These canines not only litter here and there but also panic the children and elders,” the JMC Councillor said.
He informed that there is no playground and no parking area in the Ward while the only Community Hall in his Ward-Kotli Bhawan needs development on modern lines.
“Cases of thefts involving iron gratings from the drains have been reported from my Ward while there are many drug addicts and peddlers active in some areas of the Ward for which the police should take a cognizance,” he said.
The Councillor said that he helped many old age persons, widows and physically challenged persons to get pension but the newly introduced rule for such pensions exclusively to Below Poverty Line people is creating problems for other needy people.
He said that almost all the eligible people in his Ward have got doses of COVID-19 vaccination and all the eligible voters have made their Voter Cards while Ayushman Cards have also been made by almost all the Ward residents.