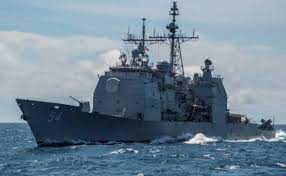 Beijing, July 20: Day after US warship entered Taiwan Strait for the third time in a week, the Chinese People’s Liberation Army (PLA) on Wednesday said that the US is a “maker of security risks” in the region with its frequent provocations.
CNN quoted Washington as saying that the latest voyage by the guided-missile destroyer USS Benfold demonstrated its “commitment to a free and open Indo-Pacific.”
Wednesday saw the Benfold transit “through a corridor in the strait that is beyond the territorial sea of any coastal state,” said US 7th Fleet spokesperson Lt. Nicholas Lingo.
Reacting to the US’ move, Senior Colonel Shi Yi said, “The constant provocation and showing off by the US fully demonstrate that it is a maker of security risks and a disruptor of peace and stability in the Taiwan Straits.”
The PLA Eastern Theater Command maintains high alert at all times and is fully prepared to defend Chinese sovereignty and territorial integrity, CGTN quoted him as saying.
(UNI)