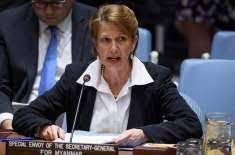 Washington, Feb 6: The US plans to begin research on potential methods of large-scale extraction of carbon from the atmosphere with $24 million in research grants as part of the Biden administration’s campaign against climate change, the Energy Department said on Friday.

“If we can figure out how to remove polluting emissions directly from the air, it would be a game changer in America’s fight against climate change,” Energy Secretary Jennifer Granholm said in a press release.

The funding will support the breakthroughs needed to address the limitations of currently available technologies, and develop entirely new and more effective approaches for direct removal of CO2 from ambient air, the release said.

National laboratories, universities, industry, and nonprofit organizations will be eligible to apply for funding from the $24 million program, the release added.

Several US companies have announced plans to experiment with atmospheric carbon capture, and artist renderings of potential projects available on the internet often depict skyscraper-size stacks of giant fans.

However, media reports indicate that existing technology is too expensive for practical use.