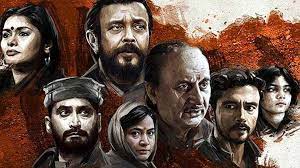 Squadron Leader Anil Sehgal
Nadav Lapid, Head of Jury, at the recently concluded 53rd International Film Festival of India, at Goa, has suo moto courted controversy by making unwarranted derogatary remarks against The Kashmir Files, an entry from the host country.
While presenting the jury report at the concluding ceremony of the film festival, Lapid said, “All of us were disturbed and shocked by the 15th film, The Kashmir Files. That felt like a propaganda, vulgar movie”.
These remarks were made in the presence of Anurag Thakur, Minister for Information and Broadcasting, and the Goa chief minister Pramod Sawant.
It is interesting to note that the board of jury has distanced itself from the remarks of the Head of the Jury !
Said filmmaker Sudipto Sen, a member of the jury board , “Whatever has been said by IFFI 2022 Jury Chairman Mr. Nadav Lapid about the film Kashmir Files, from the stage of closing ceremony of 53rd IFFI was completely his personal opinion”.
“As juror, we are assigned to judge the technical, aesthetic quality and socio-cultural relevance of a film. We don’t indulge in any kind of political comments on any film and if it is done, it is completely in personal capacity – nothing to do with the esteemed Jury Board”, he elaborated.
The ambassador of Israel to India, Mr Naor Gilon has said that Lapid should be “ashamed” of his remarks as he had “abused in the worst way” the Indian invitation to him to chair the panel of judges at the film festival.
Kobbi Shoshani, Consul General of Israel, says, “I told him ( Lapid) after the speech that he made a big mistake, that it wasn’t appropriate”.
I have been reviewing the films and writing about them for the past four decades and am personally aware of the socio-political situation in my home state of Jammu & Kashmir ( presently a union territory). And I have seen The Kashmir Files too.
I am glad that Jury Head of International Film Festival of India, Nadav Lapid is “disturbed and shocked” by the Indian film The Kashmir Files.
If Lapid is “disturbed” by the film, it simply explains that he still has a conscientious mind.
And, yes, all sensible and sensitive human beings with a feeling heart should be “shocked” by watching the well planned and gruesomely executed genocide of Hindus in the country where largest number of Hindus reside.
But, my dear Mr Lapid, you are grossly mistaken. The Kashmir Files is not a “propaganda film at all. Every single event and scene is well supported by the media reports si surreptiously hidden in the cacophony of paid media reports ; but, nevertheless, documented for posterity.
In case you are not internet savvy to find truth about the Hindu genocide in Kashmir, I offer my services to you for furnishing the media reports free of charge, lest you continue to be misled by the partisan attitude of our sickular ( read secular) brigade who love to adopt ostrich like attitude towards stark truth.
Since when have we started calling the plain truth a propaganda, Mr Lapid ? By any standards, The Kashmir File is not a “propaganda” movie as you have stated.
It is an authentic documentation of what happened in the valley of Kashmir.
Each and every act of murder, rape, looting and beheading is “vulgar”, dear head of the jury. So is tearing open the dress of a woman in full public view and chopping her breasts in front of her parents, husband, children. And, then, hanging the buthered bodies from the trees….
How I wish you had restricted your remarks only to the cinematic values of The Kashmir Files and had refrained from making politically motivated and biased statement as head of jury at a film festival.
And, by the way, did you find Schindler’s List too a propaganda film with vulgar depiction ?