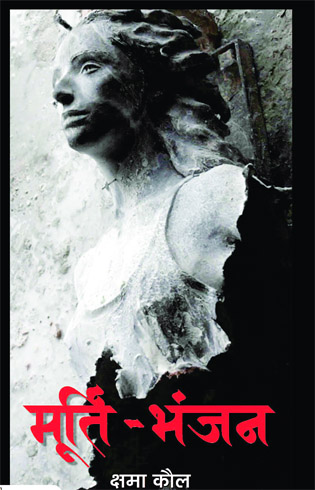 Had an opportunity of reading MOORTI BHANJAN , a novel by an award winning writer, an acclaimed novelist of repute in literary circles , Dr Kshama Kaul . Moorti Bhanjan , scripted in Hindi , gave me my moments to celebrate ! Amazing how small little incidents of life can mould a great work of art . Dr Kshama Kaul’s Moorti Bhanjan has enough for every reader to relate to the innermost urges and palpable longings of a human heart!
Through the early pages…
It felt the journey was unusual !
It really was !
An insane pull that bound me to the book page after page! Culminating into immersion with the characters! The ‘observer’, the Drishta , and the ‘observed’ , the Drishtaant in Unison !
Moorti Bhanjan set in the trouble torn , turbulent times of Kashmir of January 1990 onwards , is a tale full of sound and fury. A gruesome time-travel through almost thirty years ! Like the characters of Moorti Bhanjan , the reader too suffers the upheaval wreaked upon a community !
Choked emotions!
Choked throat!
Choked eyes !
Ignoble , Alienated , Homeless Wanderers … Exiled in their own land ! Out in the Unfathomable Inferno !
A camp in Exile ! In Delhi ! That is where the story essentially starts unfolding itself in a flashback ! The story of three women , Neera, Chinmayi and Iramanjhari ! Braving it all ! A ‘million mutinies’ in their heart !
Amid a scene of nameless , shapeless characters !
It is from here that life happens to them in bits and pieces!
Set in the context of Exodus which remains a pivot in the life of these three women, the novel is a tale about their fear and courage ; defeat and endurance; struggle and survival amid a deep psychic web of relationships !
A story of grit and grind between love and hate !
A naked revelation of the web and weave of human relationships !
But all along , a social critique;
a feministic mystique ;
a pilgrim’s progress ;
an artist’s voyage;
a soul in surrender ;
all in one !
Dr Kshama Kaul’s Moorti Bhanjan brings the grind of these three women to the fore… Neera, Chinmayi and Iramanjhri … in their troubled times! The omnipresent narrator giving them enough breath to breathe, to come out spirited and vibrant ! Neera … a quiet but daring young woman in her early twenties; free and unconventional; with a job in Delhi even before the Exodus ; a passionate sculptor; a bold and beautiful woman in flesh and blood; in deep love with a married man in his forties ! Neera, the protagonist , weaves a deep longing to survive , in the face of a dreadful disease!
Silently watching her journey from Sound to Silence !
Her elder sister, Chinmayi… a fully conscious and independent working woman ; a maverick ; married ; struggling with her two infant children and parents …Torn apart within her selves ! Struggling within the realms of space and time ! Reminiscent of Mrs. Dalloway !
Yet , passionate and full to the brim ! Replete with a sea of passion to do everything right! Like Hamlet, ready “…to take arms against a sea of troubles , And by opposing end them ? ”
With her feet firmly soiled in the ground ! But her mind imbued with the colours of a Rainbow!
Her mother Iramanjhri ,an old woman in her late sixties , a mother to three more children, grappling with her homelessness ; alienation ; enforced penury in a migrant inferno ! In a chaotic struggle with her daughters in a love-hate relationship! Iramanjhri ! A bunch of flowers ! Listless yet full of life ! Tired yet tireless ! An innate reservoir of endless energy yet a stagnant pool ! Waiting for death like the Sibyl of Cumae ,under a spell !
Dr Kshama Kaul has an unnerving style and substance! Very bold and brave ! Very adept ! Equidistant from her characters, which at times acquire real life ! Passionately dispassionate ! Characters far from simple ! ‘Round’ and ‘flat’ in full action ! Sequencing of the narrative in flash-backs from time to time ! The stream of consciousness taking the centre stage, with the reader on hooks , travelling back and forth , through the consciousness of Chinmayi ! In the very opening lines , Chinmayi is consoling Iramanjhri ! From there , on to the multi layered flash backs ! The omnipresent narrator takes the reader through the pulse of vicissitudes and vacillations of characters! Beneath what is visible ! Till you get to trust the Tale and not the Teller ! Finally, you deconstruct the story , as Derrida would love it to be disassembled ! And here we are ! What looks like Neera’s story , turns out to be an understated tale of Chinmayi !
Dr Khama Kaul has approached her subject matter from multiple perspectives ! Right from the opening conversation between the mother-daughter duo to the last silencing breath of Neera ! Though Neera longed for life , ironically , her death provides her freedom from bondage! Her story grounded in travails and tribulations of life ! A sculptor trying to infuse her breath in her lifeless sculpts !
The novel is set to win the hearts of its readers ! Dr Kshama Kaul keeps her readers in a creative curiosity!
Very deftly, she introduces Iramanjhri in a heart wrenching opening scene ! Iramanjhri takes the reader by surprise, when she refers to one character as
Adh-cutta Mukund ! Half-cut Mukund ! Mukund… a metaphor!
Who is this half-cut Mukund ?
Who is Kshama Kaul’s Moorti Bhanjak ? Leaving you here with this teaser ! Only to figure out your own version of Moorti Bhanjan !