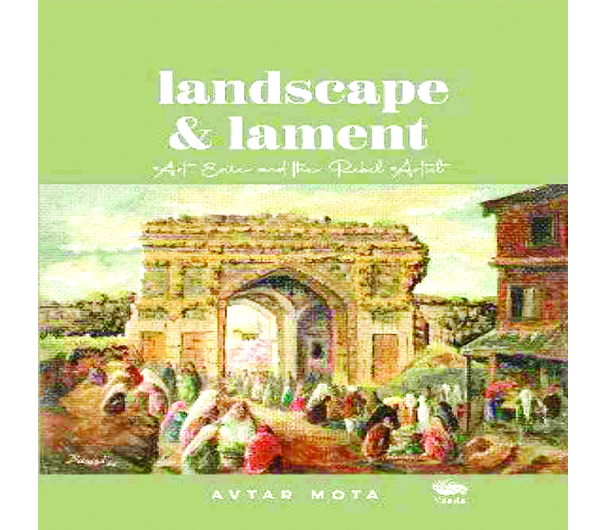 Parvez Dewan
Book: Landscape and Lament: Art, Exile and
the Rebel Artist
Author: Avtar Mota
Language: English
Publisher: Vitasta Publishing Pvt Ltd, New Delhi
Year: 2022
Price: Rs 995
Pages: 166
After Bansi Parimu completed one of his lively abstract paitings, his seven-year-old daughter, Chandrika, playfully explained it as ‘A brinjal on the left, a carrot with split ends below it, a slice of papaya above and a squished kiwi fruit on the right.’ (See a photograph of that painting below.)
I had expected Mr Parimu to explain that painting the way his intellectual admirers like Krishna Chaitanya, the noted art critic, did. Heavy stuff like ‘Linear forms that straddle [Parimu’s] frame, creating balancing directional thrusts. The areas of uniform colour have been… isolated by contouring which often suggest the relief of cloisonné enamel but without the use of ridges of Impasto…’
Whew!
I was just out of college then and had never heard words like ‘cloisonné enamel’ or ‘impasto.’ Today, thanks to helpful websites I know that the former is a technique in which thin strips of metal are bent and curved. Chaitanya probably meant that Bansi Ji had achieved that effect on canvas and oil, considering that Mr Parimu did not use metal.
As for impasto, Van Gogh reportedly pioneered this technique, in which paint is laid on an area of the surface thickly.
This Bansi ji certainly did. He painted the outlines of his ‘brinjals’ and ‘carrots’ with thick paint, as the accompanying photograph shows. Quite obviously he had been influenced by cubism.
I wanted to agree with Chandrika but was afraid that I might appear as childish as I thought she was. But, no.Being the daughter of a great artist she knew what she was talking about.
During my college days I had attended art appreciation classes but still asked naive questions like, ‘What is the artist trying to say? What do these figures represent?’
Mr Parimu put me at ease by asking me if I liked what I saw in his paintings.
Of course, I did. The bright warm colours were striking and the figures uncluttered. They had the soft, pearly finish that Bansi ji was famous for.
The great master taught me to like art for what it looked like and not seek hidden meanings, like ‘intellectuals’ do.
By the 1980s Bansi was already in the big national league. A couple of his paintings were on display at the permanent collection of the National Gallery of Modern Art, near Delhi’s India Gate. A few years later his works would be exhibited in Mumbai alongside the biggest names in the country: Ara, Souza, Hebbar and Tagore.
And the greatest of them all, MF Hussain, would write that Parimu had become his ‘friend… in the early 1960s.’
Avtar Mota’s book brings out Bansi Parimu (1933-91) in his entirety. We learn that Bansi Lal Sapru had been adopted by his father’s sister, Mrs. Parimu, who gave him his eventual surname; that Bansi ji did not go college but taught himself art instead; and that soon his art would be appreciated not only by MF Hussain but also by great artists like Tayab Mehta, Ram Kumar and Satish Gujral. Mota also tells us about Bansi’s friendships with the greatest Kashmiri minds of his generation.
Apart from being an artist, he was an ace photographer, the designer of J&K’s tableaux for the Republic Day parade in Delhi, and an occasional singer. He acted as a retired judge in Ali Mohd Lone’s anti-establishment stage play, Taqdeersaaz.
Then came Parimu’s communist phase, during which he helped with the Communist Party of India’s newspaper,Kashmir. In 1957, when G M Sadiq spearheaded a ‘quasi-communist group’ called the Democratic National Conference at Srinagar’s Gole Bagh Park, Bansi ji was the key organiser. Indeed, a source claimed that DNC was actually born in Bansi’s room-cum-studio.
Though politics were a passing dalliance for Parimu, he continued to stand up for environmental causes.
In 1975, Srinagar’s Emporium Building was going to be converted into Tehzeeb Mahal, a large cultural centre. Bansi ji launched a campaign against the felling of chinar trees for it.In 1984, he threatened to immolate himself because many chinar trees would be chopped down for a bridge across River Jehlum.
Avtar Mota has been chronicling Bansi Parimu’s life and art for several decades now. In 2013, he authored the amply illustrated, book-length Chinar Shade on blogspot.com. Therefore, no one could be better qualified to write this, again plentifully illustrated, book about Bansi ji and his art.
For a book published on art paper, with superior binding and high-class printing it is priced lower than most art books are. (Online it is twenty percent cheaper still.)
The cover painting, appropiately, shows ‘A morning scene at Kathi Darwaaza, Srinagar,’ bringing out in detail the beauty of this mediæval city gate and the culture of the walled city.
Most Kashmiris love their land. However, Bansi ji worked particularly hard to protect its identity. He even went to court to prevent the dilution of Kashmiriyat. He had great affection for his fellow Kashmiris and faith in their big-heartedness.
He used to say, ‘We Kashmiri Pandits live peacefully in Kashmir because of the goodwill of our neighbours and not because of any protectors from outside the state.’
A few months later a few hundred bigots broke the compact that had existed among millions of Kashmiris since A.D. 1320. The Parimus had to abandon their beautifully landscaped house, Takhleeq, constructed as artistically as behoves one of the leading talents of India. They migrated to the vastly different environs of Delhi-NCR.
Many respondents told Mota that ‘migration from his dear homeland gave [Bansi Parimu] the final shock and killed him’ when he was just 57.