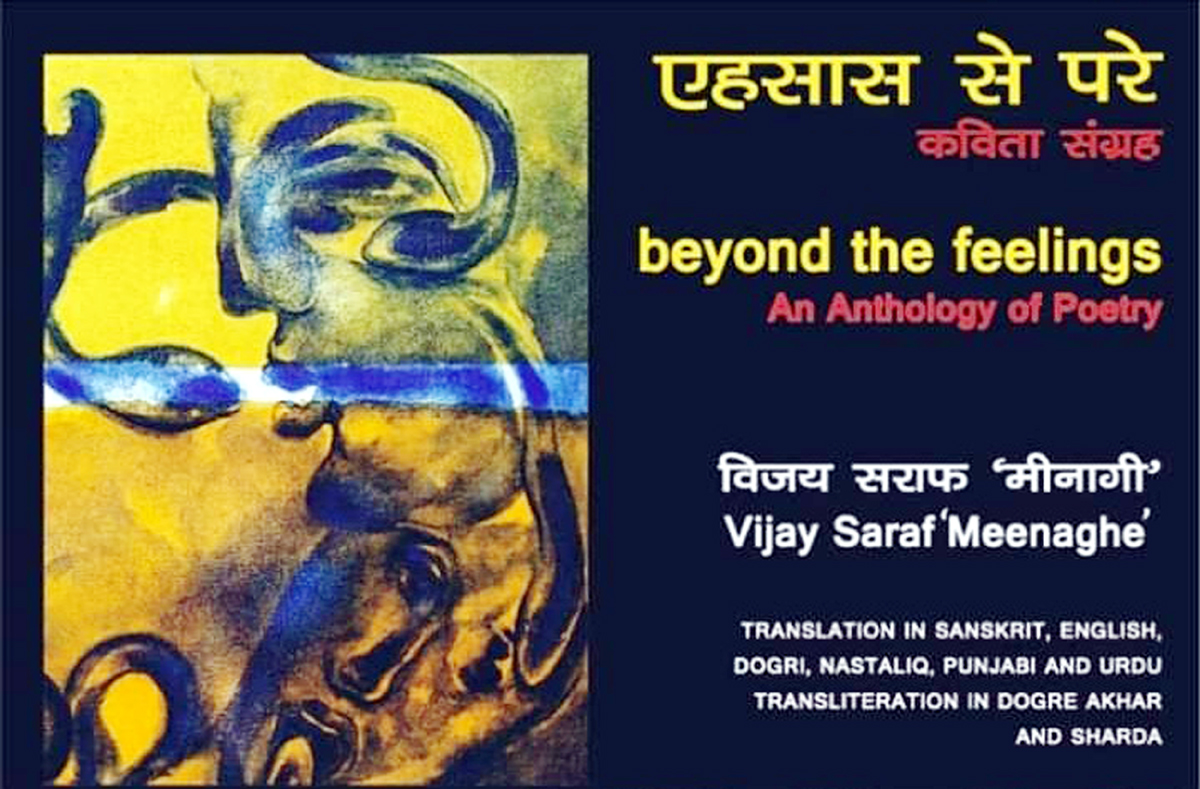 Rajeshwar Singh ‘Raju’
Vijay Saraf Meenagi doesn’t need any preface. He has already carved a niche as a painter not only at National scene but has won accolades internationally also. He has always done wonders with colours and painted with magical strokes to create magic on the canvas for so many years now. However, this time he has not come up with a master piece in painting but with a book. It may be called as a display of innermost feelings of a painter in six different languages. The much awaited book was released by Dogri Sanstha, a pioneer cultural organization of the region at Abhinav Theatre Jammu recently before accomplished gathering of eminent literary personalities from across all languages and artists from different fields.
About Book
“Ehsaas Se Pre” is a unique collection of poetry packed in artistically and tastefully designed large sized voluminous book of 743 pages. Originally written in Hindi, it carries 183 poems with their translations in six languages i.e. Dogri, Punjabi, Sanskrit, English, Urdu and Nastalik (Kashmiri) in addition to transcription in original scripts of Dogri and Kashmiri i.e. in Dogri Akhar and Sharda. The poetry covers different aspects of life and advocates even beyond life. It is inspired by spiritualism as well as realism. The poems have a soul stirring freshness and unique lyrical qualities. The translations have been done by eminent scholars of respective languages like Chhatrapal, Mohan Singh, Sham Lal Raina, Baljeet Singh Raina, Som Nath Pandit, R. L. Betab and Shuja Sultan. All the translators have proved their worth in such a way thaSt it looks like original work in each language. The book is in fact a combo of poetry and painting with each poem being supported by the Sketches. Although the author says that he has never allowed the colours to dominate words and vice versa but as a reader, one feels connected with both marvellous creations. You get inspired by the Words and then fascinated by art works simultaneously.
Historical
This book has been a master piece just like his paintings. The cover page of the book and the contents therein in the form of sketches, paintings and poems tell a lot about creative excellence and the efforts being put in. The usage of transcriptions like “Sharda” for Kashmiri version and “Dogri Akhar” for Dogri version and simultaneous translation in six different languages accompanied by world class paintings make it of historical significance. Undoubtedly, with this creative innovation Vijay Saraf Meenagi has created a history.
Unique thought
Prof. Lalit Mangotra in his presidential address has rightly said that there are so many “Firsts” in this book that make it a unique one. Chhatrapal and R.L.Shant gave a detailed account of the contents of the book in their critical analysis and were of the view that it’s an effort that can be executed only with positive energy and creativity at peak for which Vijay Saraf Meenagi is widely acclaimed for. Undoubtedly, hard work of more than 30 years has paid ultimately. The impression of spiritualism on the writing is evident in so many poems. The poet himself admits that he is much inspired by Srimad Bhagwat Gita and every time he has gone through it, he has explored it with different dimensions that have paved way for his artistic pursuits in painting as well as poetry and grow as a human being too. He is very much right when he says that artists are insane to larger extent. What I will like to add to his evaluation of thought is that such a creative work can be initiated and executed by those only who have a bit of insanity, otherwise, it’s not in the capacity of an ordinary artist.
Honestly, such an approach results in offering unique collections that become a historical documents. Lastly, it may be said that such creative works get accomplished only with sheer dedication and devotion. Vijay Saraf Meenagi has been a symbol of same which is evident from the book that has created history on many notes discussed above. I don’t think, if ever another one will make such an attempt in future keeping in view the versatility of this publication par excellence. Truly, it’s beyond the FEEL, “Ehsaas Se Pre”.