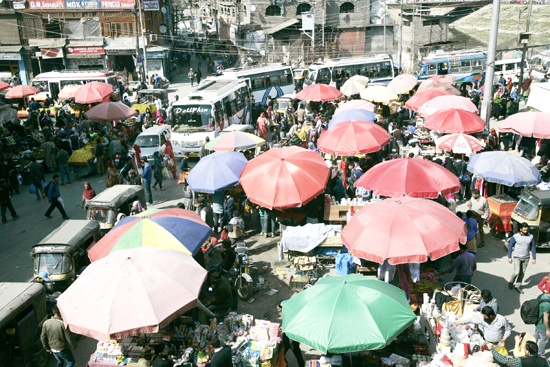 Waseem Ahmad
Srinagar, Apr 8: The street vendors continue to hamper the pedestrian and vehicular movement here in city centre despite repeated directions from the High Court on their removal.
The authorities have failed to implement the directions of the High Court that were passed to ease the traffic congestion and free illegally occupied spaces in the city.
As per commuters, they have to face immense hardships due to the presence of vendors on roadsides and footpaths. “There is no room for pedestrians as most of the space on footpaths is taken by vendors and we are forced to walk on the roads increasing the risk of accidents,” Zahoor Ahamad, a commuter said
Aquib Dar, a student said that almost all the footpaths in Lal Chowk, Amirakadal, Hari Singh High Street and other parts of the city have been grabbed by the vendors and “we are forced to get down from the footpath to avoid bumping into street vendors or other pedestrians thereby affecting the overall traffic and crowd management in Srinagar city.”
Another commuter, Muneem Farooq said that the removal of street vendors is mere an eye wash as authorities are not serious about the plan. “Despite people facing hardships and congestion on the streets of the city, authorities are not sticking to their plan of removing the vendors. On one day, the vendors are removed but next day they again occupy their spaces. It seems there is something fishy about the issue and authorities are hand in glove in this,” he said
In 2014, Srinagar Municipal Corporation (SMC), in its status report, submitted that they had prepared a list of 2911 street vendors who were found to be conducting business in different parts of Srinagar city on roads and streets.
SMC at that time, in the first instance, identified five vending zones at SRTC- -4- Partap Park, Khalisa School near Magarmal Bagh, Section-6, Batamaloo, Sector-5, Batamaloo Bandar Khah, Hazuri Bagh behind Block A & B near Children Park for the re-location of the street vendors but failed to re-locate them.
SMC, Commissioner, Reyaz Wani said that they are continuously updating monitoring committee of High Court about the issue and would do their best to decongest the city. “Whosoever (vendor) is registered with us, we have removed and re-located them, others are illegal and they will be soon removed,” he said
Asked about the identified spots for the vendors, he said the re-location of street vendors to the vending zones is in process and it requires assistance from the District Administration as well.