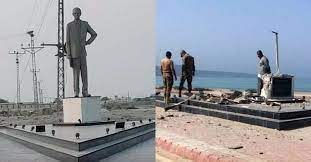 Islamabad, Dec 6: Thieves have stolen the glasses of Quaid-i-Azam Mohammad Ali Jinnah’s statue installed in front of the office of Pakistan’s Punjab province Deputy Commissioner.
Dawn quoted Deputy Commissioner Khizar Afzal Chaudhry as saying that he has ordered an inquiry into the theft incident.
The incident occurred on Saturday night.
Condemning the incident, Chief Minister Usman Buzdar has sought a report from the Multan commissioner.
He has also ordered legal action against the culprits.
This comes just few months after one of his statue in Gwadar was destroyed in a bomb attack.
Baloch Liberation Front had claimed responsibility of the attack.
(UNI)