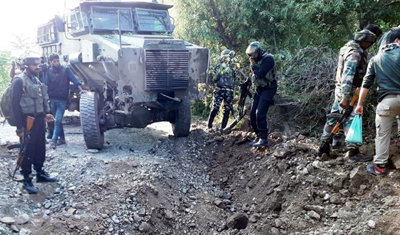 Fayaz Bukhari
SRINAGAR, May 28: A civilian and an Army soldier were killed in exchange of fire between militants and soldiers in Pulwama district last night while three soldiers were injured when militants triggered an Improvised Explosive Device in Shopian area of South Kashmir this morning.
Militants last night fired upon Army’s 50 Rashtriya Rifles camp at Kakapora around 10:15 pm.  They first lobbed a grenade and later fired towards the camp. Soldiers retaliated the fire,  triggering a brief gun battle in which a civilian and a soldier were injured.
The injured were rushed to the hospital where a civilian identified as sumo driver Bilal Ahmad Ganie son of Mohammad Ramzan Ganie of Narwa, Pulwama and a soldier succumbed to their injuries.
Police said: “It is learnt that taking advantage of the darkness militants managed to escape. Police have registered a case in this matter and investigation has been initiated.”
Click here to watch video
Army, in a statement, said: “In a cowardly and provocative act of terror, terrorists carried out a stand-off attack on Kakapora Army Camp in which one soldier was martyred. Retaliatory actions are going on.”
Three Army soldiers were injured as militants triggered an IED near Water Point in Sugan area of Shopian district of South Kashmir.
Army’s 44 RR was on regular patrolling in the area in a CASPER when militants triggered an IED followed by firing.  Three soldiers including an officer were injured in the blast. All of them where shifted to hospital and they are said to be stable.
Security forces immediately cordoned off the area and conducted searches but the militants had fled away.
A police spokesman said that militants in the wee hours of morning today blasted of an IED when an Army vehicle was passing from the area on Turkwangam Road near Zainapora in district Shopian.
“Militants in Shopian had planted an IED near the water tank which was set off early morning when an Army vehicle was routinely passing through the area. The vehicle suffered the damages due to the blast and the three jawans inside the vehicle sustaind injuries, who were subsequently removed to hospital for medical attention”, the spokesman said.
“It is learnt that the militants after triggering the blast escaped from the spot. Bomb Disposal Squad deployed at the site of the blast recovered a second IED from the site. The sanitization of area is underway to clear the track for vehicular movement. Police has registered a case in this regard and investigation is going on”, the spokesman added.
And militants today looted cash and decamped with a rifle from Jammu and Kashmir Bank at Mahind area of Sirigufwara in South Kashmir’s Anantnag district.
Police said that militants stuck in Sirigufwara in Anantnag district and took away cash amounting to Rs 1.72 lakhs from a Branch of JK Bank at Mahind and also snatched one 12 Bore rifle from the bank guard.
“Pictures of the militants who are involved in bank robbery at JK Bank Mahind in Sirigufwara district Anantnag are being circulated in the public domain. General public is requested to assist police in identifying the militants involved in this bank robbery,” the spokesman said.
“A case under FIR Number 38/2018 and Section 392 RPC, 7/25 Arms Act has been registered at Police Station Sirigufwara and further investigations into it was initiated”, the spokesman addded.
Meanwhile, police tonight foiled militants’ bid to snatch rifles from cops guarding the residence of senior PDP leader and former Minister, Peer Mohammad Hussain, at Thajiwara Acchabal in district Anantnag. The Sentry fired at militants as they tried to enter the guard post. The militants fled under the cover of darkness. Security forces rushed to the spot and manhunt was launched against the militants.