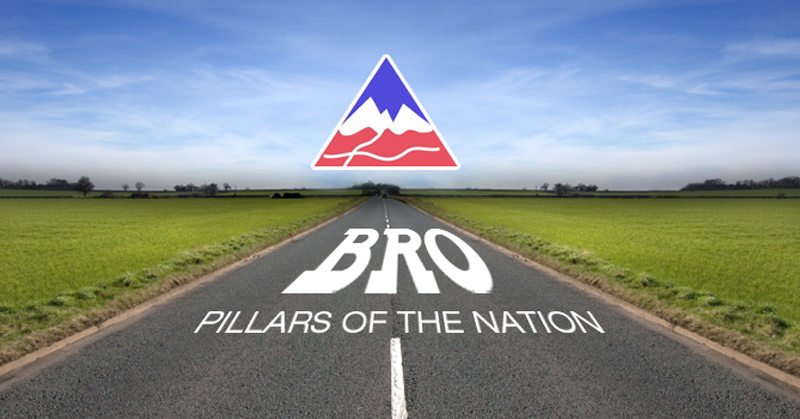 Having lived up to its name for constructing, developing and maintaining roads network in the most difficult and hazardous regions particularly in the country’s border areas and even in friendly countries, Border Roads organisation (BRO) is set to look after an assignment of an entirely different nature – that associated with the annual pilgrimage to Holy Amarnath Shrine in Kashmir. Since we know the performance of the BRO about its dexterity , professionalism and expertise in taking assignments on the mountainous terrains as a result of which its roads management expertise in Eastern Ladakh sector along India-China border areas and even in states like Himachal Pradesh, Arunachal Pradesh, Uttarakhand and Sikkim having borders with China have been increasingly proven as time tested.
Looking to such expertise ,the two main tracks thronged by thousands of pilgrims annually leading to the famous shrine of Shri Amarnath in Kashmir now poised to be managed and maintained by the BRO shall hopefully be found in better shape and more secure. Since these tracks otherwise need constant maintenance and development in order to be ”worthy” of bearing the pressure of the pilgrimage of the devotees annually for nearly three months , these tracks/ roads must be such that the pilgrimage is conducted smoothly. Since for over eight to nine months, these tracks in the upper regions remain under thick layers of snow and frost, their maintenance too is required to be carried out and managed by such an organisation which has a track record of being purely professional, equipped with latest technology coupled with requisite expertise hence the UT Government deciding to hand over the twin tracks both from Baltal in Ganderbal district and Chandanwari in Anantnag district in Kashmir to the BRO is a well conceived and planned decision.
There is another dimension to the exercise that of not any lesser challenge in that reaching out of material , equipment and personnel to these difficult spots is in itself quite trying . However, braving such odds is the routine nature and role of the BRO as a result of which it can fairly be expected that the twin tracks namely (from Pahalgam side) Chandanwari-Sheshnag- Panchtarni – Holy Cave and (from Baltal side) Baltal – Holy Cave, shall remain in a state of absolute worthiness usually much ahead of the dates the actual pilgrimage starts taking place to the Holy shrine. This was going to make things easier for the UT Administration in making all other required arrangements like medical facilities, communication, regulating the rush , providing of security and other related critical support so as to make the pilgrimage smooth and hassles free for the devotees which come to pay obeisance at the shrine in hundreds of thousands from across the country.
The decision of “handing over” these two tracks to the BRO has probably been prompted by factors like in the context of and looking to the natural fury amidst the yatra schedule this year in the shape of a cloud burst and resultant flash floods which claimed some precious lives not to speak of washing away of the luggage and belongings of the pilgrims from the tents they were temporarily taking shelter in . No doubt, UT Department of Roads and Buildings has been executing works on the twin tracks and may be certain contracts and assignments must be underway towards completion and other liabilities etc related to management of the tracks must be there which are learnt to be got all “cleared ” by March 2023 so as to fully handover the two tracks and some additional assignments to BRO becoming smooth and ”exclusive” .
Since the decision of the UT Government has to be seen in the absolute light of making the two tracks worthy of trekking by the pilgrims so as to make, as far as possible, the pilgrimage en-route to the Holy Cave smooth and secure, there are lot many formalities required under the system to be completed including clearance by and approval of many “stakeholders” as also disposing of any petitions/ appeals if any, in courts, there must , therefore, not be unnecessary and avoidable hitches brought in though even with apparent good intentions. Since the decision to handover the tracks to BRO is felt absolutely necessary , the pipeline of necessary clearance must be seen through at an early date.