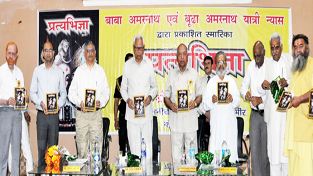 Excelsior Correspondent
JAMMU, Apr 8: Governor N.N. Vohra, Chairman of the Shri Amarnathji Shrine Board released “Pratibhigya”, a publication brought out by “Baba Amarnath and Budha Amarnath Yatri Niyas” at a function held here today.
Governor observed that Shri Amarnathji Shrine Board is working continuously for improving the facilities and conveniences provided to the yatries and in the past ten years very significant investments have been made to establish infrastructural arrangements at the base camps and en route the holy cave. He added that with the widening of tracks, installation of side railings along the tracks, increased number of toilets and baths in the camps, and prompt evacuation of seriously injured or patients to nearby healthcare facilities, the Shrine Board is striving to make the pilgrimage a comfortable and safe experience for the yatries.
Governor observed that the Board is continuously updating the registered yatris through SMSs regarding various aspects of the yatra, particularly about weather forecasts, so that they are able to plan their journey safely.
Expressing sadness over the causalities of the yatris in road accidents in July last year, Governor observed that the safety and security of the pilgrims continue to remain the prime concern of the Shrine Board which bears all the expenses for airlifting of the bodies of those killed and their kins to their native places. He added that from 2017 the scale of ex-gratia relief provided in the case of an accidental death has been increased to Rs 3 lakh.
The Governor lauded the cooperation extended by the State Administration and the Yatri Niyas to the Shri Amarnathji Shrine Board for the smooth conduct of Yatra 2017 which remained uninterrupted despite a terrorist attack on a bus carrying pilgrims. He urged all the stakeholders to strengthen the Shrine Board’s efforts in publicizing and disseminating the Do’s and Don’ts and the Health advisories related to this Yatra.
Governor re-iterated his commitment for construction of a Yatri Bhavan at Shri Buda Amarnathji, and observed that with increasing civic facilities being developed here, there has been a progressive increase in the number of pilgrims, every year.
In his welcome address, Surinder Mohan Aggarwal, President, Baba Amarnath and Budha Amarnath Yatri Niyas complimented the Governor and the Shri Amarnathji Shrine Board for smooth conduct of Shri Amarnathji Yatra 2017. Aggarwal said that the Yatri Niyas is deeply committed to support the Shrine Board’s initiatives to bring out progressive improvements in the management of future Yatras. Khem Chand Sharma, senior VHP leader, also addressed the gathering.
Umang Narula, Principal Secretary to the Governor and Chief Executive Officer of the Shri Amarnathji Shrine Board presented a cheque of Rs. 2 lakh to  Baba Amarnath and Budha Amarnath Yatri Niyas for supporting its various activities.
Ramesh Arora MLC, Bhupinder Singh, Additional CEO of the Shri Amarnathji Shrine Board and various prominent citizens were among those present on the occasion.