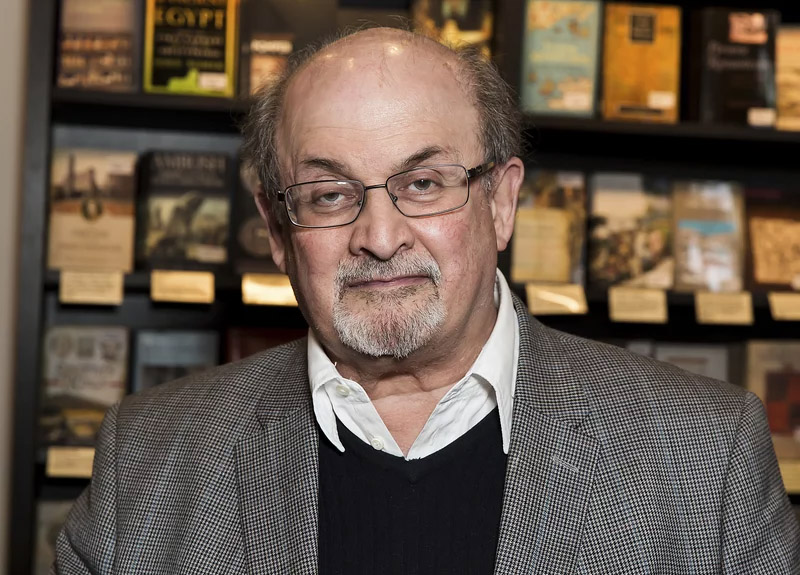 NEW YORK, Aug 13: Salman Rushdie was on a ventilator with damaged liver and may lose an eye after the Mumbai-born controversial author was stabbed in the neck and abdomen by a man who apparently sympathised with Shia extremism and Iran’s Islamic Revolutionary Guard Corps.

Rushdie, who faced Islamist death threats for years after writing “The Satanic Verses”, was stabbed by a 24-year-old New Jersey resident identified as Hadi Matar, a US national of Lebanese origin, on stage on Friday while he was being introduced at a literary event of the Chautauqua Institution in Western New York.

“The news is not good,” the 75-year-old writer’s agent, Andrew Wylie said about Rushdie’s critical health condtion, sending shockwaves across the literary world which condemned the incident as an attack on freedom of expression.

A profusely bleeding Rushdie was airlifted from a field adjacent to the venue to a hospital in northwestern Pennsylvania and underwent surgery for several hours.

“Salman will likely lose one eye; the nerves in his arm were severed; and his liver was stabbed and damaged,” Wylie told The New York Times.

Rushdie, who won the Booker Prize for his novel “Midnight’s Children”, is still unable to speak, he said.

Police are working with the FBI and local authorities to determine the motive.

A preliminary review of Matar’s social media accounts by law enforcement showed him to be sympathetic to Shia extremism and the causes of the Islamic Revolutionary Guard Corps, a law enforcement person with direct knowledge of the investigation told NBC News.

The officials say investigators found photos on Matar’s phone of Iranian Maj. Gen. Qasem Soleimani and Abu Mahdi al-Muhandis, the leader of Iraq’s pro-Iranian militia movement, who were killed by US forces in a drone strike in Baghdad in 2020.

“We have been in touch with our counterparts in the State of New Jersey where the attacker is from to share information and assist them in helping us to better understand the planning and preparation which preceded the attack so that we and the different agencies involved can determine what, if any, additional charges should be asserted,” the DA’s office said.

Authorities are also working to obtain search warrants for several items found at the scene, including a backpack and electronic devices, Staniszewski said.

Authorities believe the suspect was alone but are investigating “to make sure that was the case,” Staniszewski said, adding that authorities will determine “appropriate charges” as the investigation continues.

Rushdie’s fourth book The Satanic Verses in 1988 forced him into hiding for nine years.

The late Iranian leader Ayatollah Ruhollah Khomeini accused Rushdie of blasphemy over the book and in 1989 issued a fatwa against him, calling for his death. Rushdie’s writing has led to death threats from Iran, which has offered a USD 3 million reward for anyone who kills him.

Rushdie was stabbed as he was on the stage at the Chautauqua Institution, a not-for-profit community on Chautauqua Lake in southwestern New York state.

Staniszewski said Rushdie was provided medical treatment by a doctor who was in the audience until emergency medical personnel arrived on the scene.

Rushdie was about to speak at the special Chautauqua Lecture Series event exploring the theme of “More than Shelter” for a “discussion on the United States as an asylum for writers and other artists in exile and as a home for freedom of creative expression”.

He was joined by Henry Reese, co-founder of the Pittsburgh nonprofit City of Asylum, the largest residency programme in the world for writers living in exile under the threat of persecution.

Staniszewski said at approximately 10:47 am local time, Rushdie and Reese (73) had just arrived on stage at the Chautauqua Institution for the event. “Shortly thereafter, the suspect jumped onto the stage and attacked Rushdie, stabbing him at least once in the neck and at least once in the abdomen.”

Reese was transported via ambulance to a local hospital, treated for facial injuries and subsequently released, authorities said.

“We are deeply shocked and appalled to hear of the attack on Salman Rushdie while he was speaking at the Chautauqua Institution in New York. We condemn this violent public assault, and our thoughts are with Salman and his family at this distressing time,” Markus Dohle, CEO of Penguin Random House tweeted.

US National Security Advisor Jake Sulliving denounced the “appalling” attack and said members of the Biden-Harris administration were praying for his speedy recovery.

A leading literary organisation expressed “shock and horror” at the “brutal, premeditated” attack on Rushdie.

“PEN America is reeling from shock and horror at word of a brutal, premeditated attack on our former President and stalwart ally, Salman Rushdie,” PEN America CEO Suzanne Nossel said in a statement.

“We can think of no comparable incident of a public violent attack on a literary writer on American soil,” she said.

Cautauqua Institution president Michael Hill said the organisation is holding Rushdie and Reese as well as their families “close in prayer at this hour”.

“Today, we are called to take on fear and the worst of all human traits. Hate,” Hill said. (PTI)