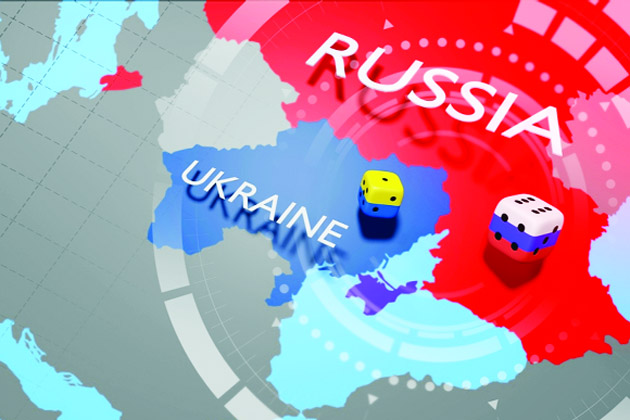 K R Sudhaman
India cannot be oblivious to the fact that any war in Europe will impact its economy and trade. It may not be direct but the consequences will be felt in different areas in different ways, more so because India is now a close ally of both Russia and United States. Russia is India’s time-tested friend and has helped India in many ways during difficult situations. With United States, India’s relationship is growing and is critical in dealing with its belligerent neighbours China and Pakistan. Every nation has its security and economic interests and India’s interests are best served if both Russia and Ukraine come to negotiating table and resolve their differences. India will have to deal with the situation as it emerges but it is in India’s interest for Ukraine to remain non-aligned so that both Ukraine and Russian interests are best served as the two countries are neighbours.
Sanctions or no sanctions Russia is determined to ensure at any cost that its interests are not jeopardized by Ukraine joining NATO, which United States is pushing for. Nato’s membership has grown from mere 16 to 30 since the Cold war ended making the World unipolar with just one Superpower that is United States. If pushed further Russia and China may come together resulting in a new World order. This according to former NSA Shiv Shankar Menon may not have any immediate fall out as the India-Russia relationship is time-tested but in the long run it could have its strategic consequences in the face of China’s belligerence towards India lately.
In the face of this background how would this war play out on the economy and trade is worth analyzing. India is no longer a weak economy nor is its voice feeble globally as it used to be in the past. Even when its economy was weak and globally not a big player, India has through its non-aligned foreign policy had handled more difficult emerging situation deftly and there is no reason why it would not do so this time as well and so far it has handled the situation well to protect its interests. It goes to the credit of Indian Prime Minister Narendra Modi in handling emerging situation deftly.
Modi in his conversation with Vladimir Putin has called for return to the path of diplomacy. Putin has acknowledged Indo-Russian relationship under Modi is no different from what it was during Nehru, Indira Gandhi and other Indian Prime Ministers. As regards economic impact, it is very evident that the aftershocks have already been felt with capital market getting bombed on Thursday after the news of Russian invasion with both Sensex and Nifty falling rapidly by over 4 per cent. But the good news is that the stock market had recovered substantially by over 2 per cent as global sentiments improved as U S sanctions did not target Russia’s oil exports nor access to swift payment network. But the stock market remained volatile in the face of the fluid war situation
With the uncertainty looming large Indian government has already set up a high-powered Inter-ministerial task force of senior officials to look at the implications of fresh US and EU sanctions announced against Russia on India’s economy in general and trade in particular. This committee will put in place a strategy to deal with the emerging situation on the Indian economy. It is not yet clear what final shape the sanctions against Russia will be. But there is a lot at stake as India is engaged with Russia in many areas which included defence, energy and trade in goods. India’s exports in 2020-21 was surging towards $3 billion mark while its imports from Russia was surging towards $5.5 billion mark. Though the volume is not that high, the sanctions could hurt payment channels and hurt certain sectors like pharmaceuticals, tea and mobile phones.
India could be more impacted if the imports from Russia get hit as New Delhi is dependent on Moscow for crude oil, petroleum products, coal, gold, metals and fertilisers. These are essentials. As it is rising crude oil prices, more so after the outbreak of the war has already had an impact on the Indian economy. It also has a cascading effect on inflation, which is on the rise in the recent months. The rising inflation at a time when economic growth has been kick-started after the Covid pandemic is not a welcome development as it has put Reserve Bank of India in a dilemma on how to find a balance between growth and inflation. This is a challenging task for monetary policy makers.
The war has come at a time when India’s trade particularly goods exports have started looking up clocking at over 20 per cent growth in 2021-22. India’s exports growth has not been good in the last few years remaining at around $300 billion and it is for the first time it is expected to touch or cross $400 billion mark this financial year. Apart from sanctions impacting crude oil and inflation as a consequence, the exports could be further impacted because of freight charges going up in the face of war. This will make logistics and transactions cost higher impacting the already wafer thin margin in exports. Overall the earlier the issue gets resolved the better it is for not only India but the World and rightly India and international communities are working toward early end to the war as it is in nobody’s interest. As Bertrand Russell said “war does not determine who is right – only who is left.” War and violence never solved anything but leaves only pain. Hope wiser sense prevails among warring countries and global community to end this early. (IPA)