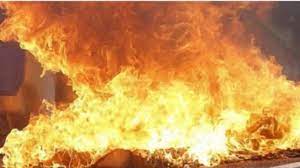 The explosion took place when the victims were passing in a vehicle in the Mat area of Dera Bugti district.

Police said at least four people were killed in the blast while 10 were injured.

Senator Sarfraz Bugti, who belongs to the area, confirmed that attack, saying one of his cousins was also killed in the explosion.

He also said the outlawed Baloch Republican Army (BLA) was behind the blast.

“Provincial and federal governments of Pakistan are failing to protect innocent people. This kind of situation will push people to take measures on their own. The writ of the government needs to be implemented in Balochistan,” Bugti said in a brief statement posted on Twitter.

Balochistan Chief Minister Mir Abdul Quddus Bizenjo said the enemies had once again carried out a cowardly act of terrorism to ruin peace in the province.

“No effort will be spared to bring the terrorists to justice,” Binzejo said.

The explosion came just days after 10 soldiers were killed in an attack on their post in the Kech area of the province.  (PTI)