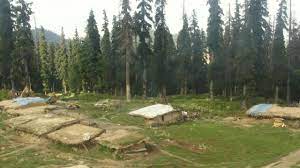 Can anyone seriously shed two tears over as much as 3.5 lakh kanals of forest land, as per official reports, having been encroached upon in Jammu and Kashmir which otherwise was known for its dense forests full of numerous and rich varieties of trees including those of high medicinal and therapeutic value besides being adorned by variety of wild life, flora and fauna. Just calculating at nominal rate and not the market rate of the grabbed land, the cost works out to be Rs.1950 crore. Stunning and shocking indeed. Unofficial figures of such thieved land of forests in Kanals could go still higher. If it is not stopped ruthlessly now, far is not the day when draught and draught like situations would visit not Jammu region only but Kashmir valley as well besides frequent floods and natural calamities connected with disturbing the ecology and the environment. It is, therefore, in the fitness of things that the government left aside all considerations related to any fallout – political and otherwise – as a result of retrieving people’s trust and property – the forest land. Even when the combined High Court of Jammu and Kashmir and Ladakh is seized of the matter and has viewed the encroachments seriously, what prevents the Government from taking concrete action. The times of constituting committees to probe into the matter and submitting the reports have gone at least when seen in the context of the fate of a committee constituted two years ago that bothered not submit any report so far, but why? Why were the members on that committee never asked to explain the reasons of showing disregard for the assignment looking to the issue involved by not reporting to the administration thus making the entire purpose and objective behind framing the committee as a joke. Now the government has again constituted a “High Level” committee and we do not understand the purpose nor rule out behaving by this committee in the same fashion as the last one. Should the government and the administration look so much helpless and just be seen passing the time and evading a strong action? We need somehow to have the land evicted from the encroachers or thieves as early as possible, let the UT administration create an example in itself.