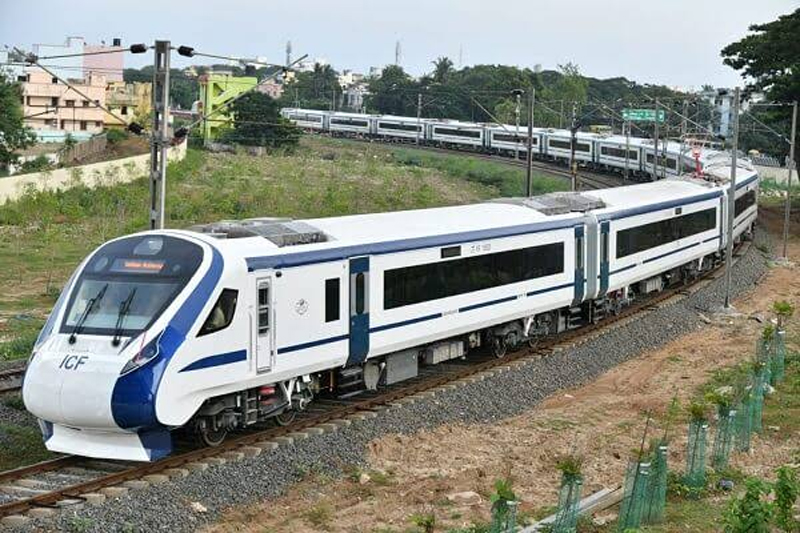 The railways is looking at becoming a major exporter of Vande Bharat trains by 2025-26 to markets in Europe, South America and East Asia, a senior official said on Friday, adding that the latest version of the indigenous trains with sleeper coaches will be operational by the first quarter of 2024.

He also said the railways is planning to clock 10-12 lakh kilometers on 75 Vande Bharat trains over the next few years, for these to be export ready.

Talking about these trains, the official said these have a rider index of three, which means no or minimal jolts for passengers; and noise level of 65 decibel which is 100 times less than the sound produced in aircraft.

He also said that while the present Vande Bharat trains are fit for broad gauge, the railways’ manufacturing units will customise the trains to run on standard gauges used by countries across the world.

In fact, the national transporter is constructing a 59 km testing track between Gudha-Thathana Mithri in Jodhpur Division (about 70 Km from Jaipur) for carrying out tests/trials of various rolling stocks. This track can test trains running at a maximum speed of 220 kmph, maneuvering a variety of curves. The track will be ready by January 2024 and trains which will be exported will be tested here for prospective clients, officials said.

They also said that sleeper Vande Bharat trains will be ready by the first quarter of 2024 and will be manufactured by the Integral Coach Factory, Chennai.

A decision is yet to be taken on whether these trains will replace the existing Rajdhani and Duronto trains on routes like Delhi-Mumbai, Delhi-Howrah and other major routes or run parallel.

In another development, the officials said India will get its first tilting trains by 2025-26, with 100 Vande Bharat trains being manufactured using this technology which enables trains to maneuver curves at higher speeds, just as a motorbike on a winding road.

They said 100 of the 400 Vande Bharat trains to be manufactured by 2025 will have this technology. (PTI)