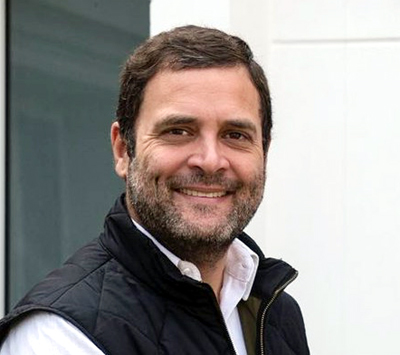 NEW DELHI: Congress chief Rahul Gandhi today led his party on a nationwide fast targeting the Modi Government but a picture of party leaders having ‘chhole-bhature’ before the protest gave the BJP fodder to launch a counter-attack and dub the exercise a “farce” and “joke on Dalits”.
Gandhi, whose party had announced the fast over a variety of issues including alleged caste and communal violence, accused Prime Minister Narendra Modi of being “anti-Dalit”.
In another apparent embarrassment, the Congress had to ask anti-Sikh riots accused Sajjan Kumar and Jagdish Tytler to stay away from dais at Rajghat, where the fast was held in the national capital, which BJP spokesperson Sambit Patra described as “admission of guilt” by the opposition party.
While Kumar left the venue soon after, Tytler sat in the audience along with party workers.
Speaking at the Mahatma Gandhi’s memorial, Rahul Gandhi launched a scathing attack on the Government.
“We are standing here against the BJP’s oppressive ideology. We are standing here today and will stand against it all our life and we will defeat them in the 2019 elections,” Gandhi told reporters.
As allegations and counter-allegations flew thick and fast, Patra claimed Gandhi did not turn up at 10.30 am, when the fast began, as he was used to a “politics of luxury” and could not wake up in morning even for a day. (AGENCIES)