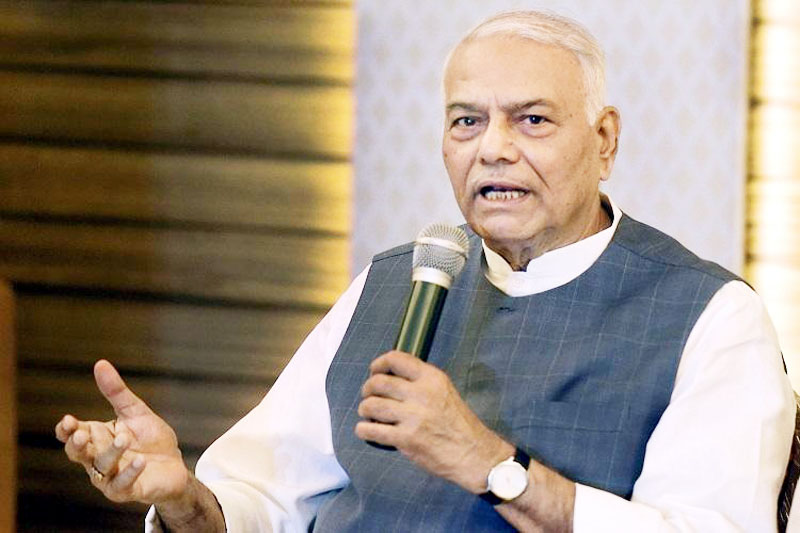 KOLKATA, Dec 12: Former BJP leader Yashwant Sinha on Wednesday said the election results from three key states have destroyed the “untenable theory of the Modi magic” and hoped that the saffron party’s debacle would propel the opposition parties to bond better for the 2019 Lok Sabha polls.
The BJP has lost three of its bastions – Madhya Pradesh Chhattisgarh and Rajasthan – to the Congress in the just-concluded assembly polls. In Mizoram and Telangana, the party won one seat each.
Sinha, who has been vocal with his criticism of Prime Minister Narendra Modi, also suggested two alternatives for defeating the BJP in the general election.
“A national-level pre-poll alliance of all opposition parties, including the Congress, should be formed to put up a one-to-one fight against the saffron party and stop division in anti-BJP votes.
“If the first option does not succeed, there should be a nationwide pre-poll alliance of regional parties with possible adjustment with the Congress, where ever that is possible,” he said.
The veteran leader, who held portfolios of finance and external affairs from 1998-2004 under Atal Bihari Vajpayee-led BJP government at the Centre. Quit the party earlier this year.
He said there is no conflict of interest among the regional parties.
“The TMC (in West Bengal) won’t have any conflict with the TDP (in Andhra Pradesh) or the DMK (in Tamil Nadu). There is a bright possibility of regional parties, together, getting more seats than the BJP. The regional parties should have an adjustment with Congress. After polls, they can come together for government formation,” Sinha told PTI in an interview.
He exhorted the Congress to refrain from making the mistake of declaring itself as leader of the opposition alliance even though it managed to win assembly elections in three states.
The leader of the opposition alliance should be chosen only after the elections, Sinha suggested.
“The election results in five states destroyed the untenable theory of the Modi magic and will propel the opposition parties to bond better for the next Lok Sabha polls,” the former Union minister asserted.
Citing reasons behind his recommendation of pre-poll alliance, Sinha said if the saffron party emerges as the single largest party with around 150 seats, it may be called first to form the government even if the Congress and the regional outfits taken together bag more seats.
“According to the convention, which has been established in our country, the President will be well within his rights to invite the single largest party (BJP) and that will open floodgates for mischief (horse trading). But if the regional parties form a pre-poll alliance it will be treated as a single entity,” he reasoned.
His comments came in the backdrop of opposition parties such as RJD, SP, TDP vociferously seeking a grand alliance and the Congress stressing on state-specific alliances.
The veteran leader alleged that the BJP was rooting for presidential form of elections.
“Who was Narendra Modi before being elected as PM? He was a chief minister of a state. There is an array of leaders in the opposition parties who have served as CMs and former ministers. There is no dearth of leaders,” he said.
Sinha’s remarks come days after the BJP took at a dig at the anti-BJP camp, asking it to first declare a prime ministerial candidate before thinking of ousting the Narendra Modi government.
The former finance minister said the anti-BJP parties which are dominant in their respective states, including the Congress, should take the responsibility of bringing other parties in their fold.
Speaking on the performance of the Modi government, he said the a second term for the Modi government would prove to be “disastrous” for the people as “no sign of democracy” will be left anywhere in the country.
Asked about the issue of Ram Mandir construction in Ayodhya, he said the matter has nothing to do with religion and the BJP was just trying to score political brownies ahead of elections.
On whether he will act as a mediator among various regional parties to unite them and bring them under one umbrella, he said it depends on the opposition camp.
“It depends on them (opposition), not me as they have to approach me and tell me what I need to do — bring together an alliance or chalk out a programme of action or policy for the new government… Even if the new alliance is voted to power, I will really and truly retire,” he added. (PTI)