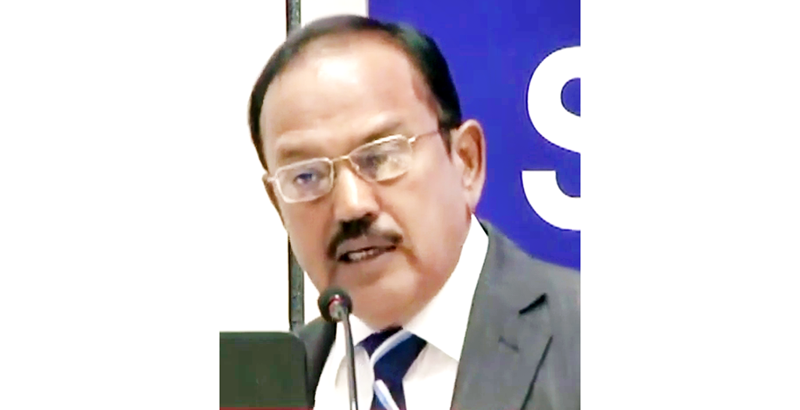 ‘No nation can afford to go for war’

NEW DELHI, Oct 14: Pakistan is under a lot of pressure at the Financial Action Task Force (FATF) me-eting, currently un-der way in Paris, to rein in terror groups operating from its soil, National Security Advisor (NSA) Ajit Doval said today.
Doval, who was addressing a meeting of the chiefs of the Anti Terrorism Squads (ATS), said the biggest pressure on Pakistan comes from the functionaries of the FATF.
In the present context, no country can afford to go for a war as the financial and human costs are huge and no one is sure about the victory, he said.

Click here to watch video
“One of the biggest pressure that is coming on Pakistan today is because of the procedure of the FATF, I guess. The FATF has put so much of pressure on them that no other action could have been so,” Doval said.
The FATF is an inter-governmental body established in 1989 to combat money laundering, terrorist financing and other related threats to the integrity of the international financial system.
Pakistan was placed on the grey list by the Paris-based watchdog in June last year and was given a plan of action to complete it by October 2019, or face the risk of being placed on the black list with Iran and North Korea.
At the ongoing plenary of the FATF, chances are high that Pakistan will be retained on the ‘grey list’ as it has complied with just one of the 40 recommendations set by the global anti-money laundering watchdog at the time of its inclusion in the list.
If Pakistan continues with the ‘grey list’, it would be very difficult for the country to get financial aid from the IMF, the World Bank and the European Union, making its financial condition more precarious.
Doval said if the investigating agencies could collect correct, sustainable and quotable information, which could be put before the international forums effectively that how Pakistan is supporting and financing terrorism, it would expose the country.
“You can do your best to collect these evidence. You all can contribute in your small way,” he said at the event, organised by the National Investigation Agency (NIA).
Referring to Pakistan, the NSA said terrorism is a low-cost sustainable option which may damage the perceived enemies to a great extent.
“A state is supporting a criminal and some states have mastered in this act. Pakistan has made terrorism as an instrument of state policy. That has made it a very great challenge (for Indian security agencies),” he said.
Doval said war has become increasingly a cost ineffective instrument in achieving political and strategical objectives and nobody can afford it these days because of the cost involved with it.
“Not only in the matter of money but in terms of lives that would be lost. But more important thing is you are not sure of victory. In spite of the superiority in terms of resources and technology, the Americans could not achieve their objectives in Vietnam and the Soviets in Afghanistan.
“So increasingly, the reliance on war is on the instrument of covert actions. And in the instrument of covert actions, terrorism is one of the manifestations of covert actions that adversarial powers are using it. It is a low cost sustainable option and it bleeds the enemy much more than probably in the war, and that it can be done for a long period,” he said.
He said as the world has become more complex and as strategical and geo-political relations become complex, a war is no longer an option and that is why the terrorism has increasingly been used.
Doval said terrorism in India and many other parts of the world is state-sponsored.
“When I say it is state sponsored terrorism, they not only provide training, that they provide to recruits, they provide weapons, they provide ideology, they fix targets. More than that, they also give a higher degree of deniability and the resources and technology which the investigating agencies have not been able to get them and their tentacles. The criminal has the support of the state,” he said.
The NSA also talked about the approach of the judiciary to treat terrorists at par with the cases of ordinary cases.
“They (courts) apply the same bench marks and standards. Building up a case, you need eye witnesses. From where do you bring eyewitnesses in terrorism cases. Firstly, there are few eyewitnesses in terrorism cases. It is very very difficult. For an ordinary citizen to depose against a dreaded Jaish-e-Mohammad or Lashkar-e-Toiba terrorist,” he said.
Doval said the terrorists’ accessibility to high technology makes the collection of evidence against them difficult and complex.
Referring to media, the NSA said it is a very important organ to fight terrorism and advocated a transparent media policy to be adopted by security agencies.
“Take the media into confidence. Since we don’t tell them many things, probably, they speculate and write. So give them information so that people prepare themselves against terrorism,” he said.
The NSA said the perception management is also an important part to fight terrorism and somebody should be trained to handle media and give information on it.
“Why it has happened, how did it happen and what can be done, and what the Government is doing. Probably they (media) would be very supportive. Whenever you take them into confidence, they are very very supportive. Frame a media policy,” he said. (PTI)