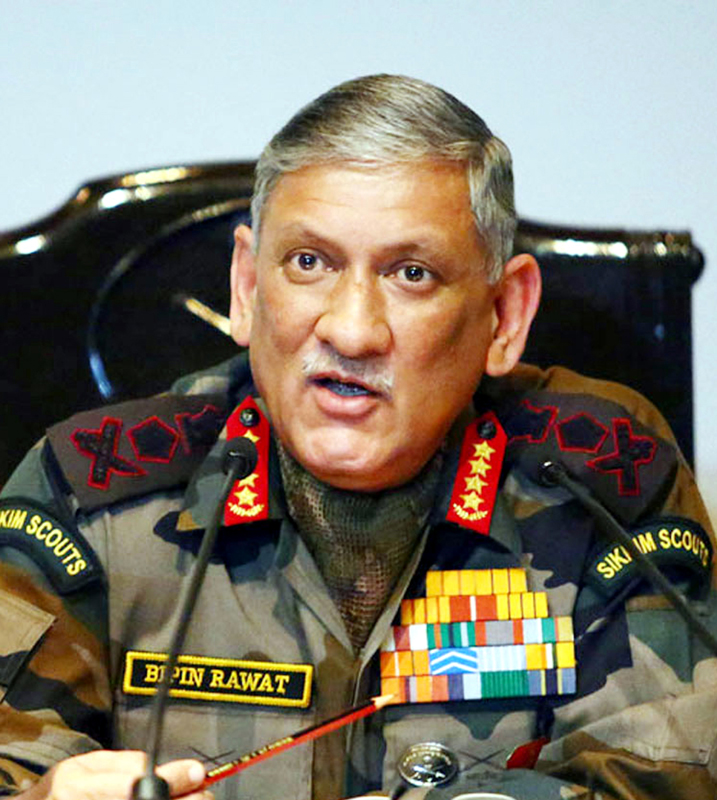 ‘Army not ready for women in combat roles’

PUNE, Nov 30: Army chief General Bipin Rawat today said Pakistan must curtail terror activities on its soil and develop itself as a secular State if it wanted cordial relations with India.
He also said the Indian Army was not yet ready to have women in combat roles.
Rawat was speaking to reporters on the sidelines of the Passing Out Parade of the 135th course at the National Defence Academy (NDA) here.
Asked about a recent statement of Pakistan Prime Minister Imran Khan about his country willing to take two steps for every step forward by India, he said the neighbouring nation should first take steps to curtail terror activities on its soil.
“I would like to tell Pakistan to initiate that first step (curtailing terror). In the past, India has taken several steps. When we say terror is being harboured in your country, show some action by curtailing terror activities which are used against India,” Rawat advised Pakistan.
On Khan’s statement as to why India and Pakistan could not be friends when Germany and France could be good neighbours, he said the neighbouring country first needed to see its internal condition.
“They have turned Pakistan into an Islamic country. If they want cordial relations with India, they will have to develop themselves as a secular State,” Rawat said.
“How can you say that we can stay together when you are an Islamic State? India is a secular State and for us to stay together, both of us will have to be secular. If they are willing to become secular like us, I think they have an opportunity,” he added.
Speaking about assigning combat roles to women in the armed forces, Rawat said, “We are not yet ready for that as facilities have to be created within the armed forces and women also need to be prepared for that kind of hardships. It is not easy. Let us not compare ourselves with western nations. The western nations are more open,” he said.
“Yes, we may be more open in our big cities, but our Army personnel are not coming from big cities only. They are coming from rural areas too, where the intermingling, which is expected, is still not there,” the Army chief added.
“Women officers are being inducted in all the three services. But what we have to decide is whether some of them can be given permanent commission. The Army too has taken a call that there are some aspects, some fields, where we need some kind of continuity and permanency.
“In a command-oriented Army, male officers do not fit the bill everywhere. The Army needs language interpreters as military diplomacy is gaining ground. The basic requirement is understanding the language while talking to other nations, military to military. So we are looking for women as interpreters,” he said.
Rawat added that there were several other fields where the Army was thinking of inducting women. (PTI)