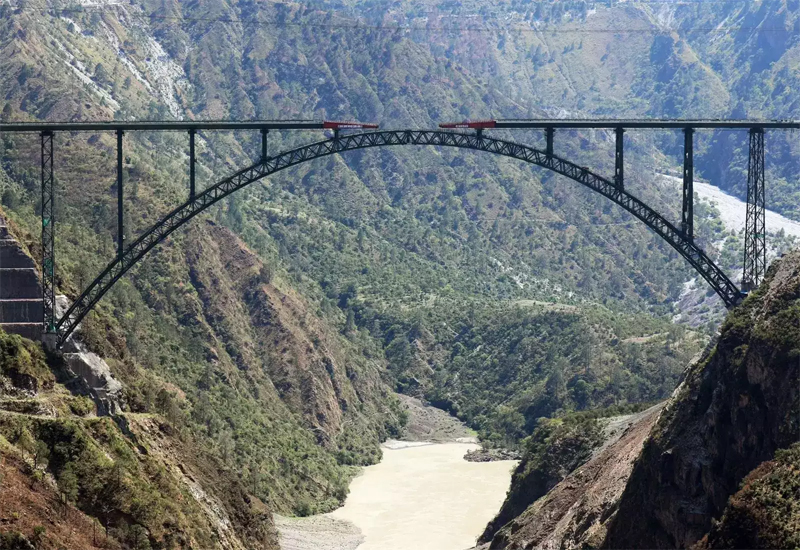 Excelsior Correspondent
JAMMU, Aug 10: The overarch deck on the world’s highest single-arch railway bridge over Chenab river in Reasi district will be launched on August 13.
The 1.315 km long bridge which is being built at a dizzying height of 359 meters is even taller than Eiffel Tower. It will connect the Salal-A and Dugga Railway Stations on either side of the bridge with the mighty river Chenab in Reasi district. The moment will be marked with a golden joint and is seen as the symbol of national integration.
Officials told the Excelsior that the bridge is the tallest railway bridge in the world and is being constructed by the Northern Railway at an estimated cost of Rs 28,000 crore as part of the Udhampur Srinagar Baramulla Rail Link Project.
Named ‘Chenab Bridge’, this railway bridge will be 359 meters higher than the water level of the Chenab river and its length will be 1315 meters.
“It is a major achievement towards the completion of the 111 km long Katra-Banihal railway section, for which massive Himalayan Hills are being mined,” the officials said.
The installation of the arch before the construction of the deck was one of the biggest civil engineering challenges in the recent history of India, with a 5.6-meter span at the top of the bridge being connected at the center on both sides.
The bridge will have a minimum lifespan of 120 years and will be built for trains at a speed of 100 km.
This bridge has the ability to withstand winds of 266 kilometers per hour and withstand blast load and severe earthquakes.