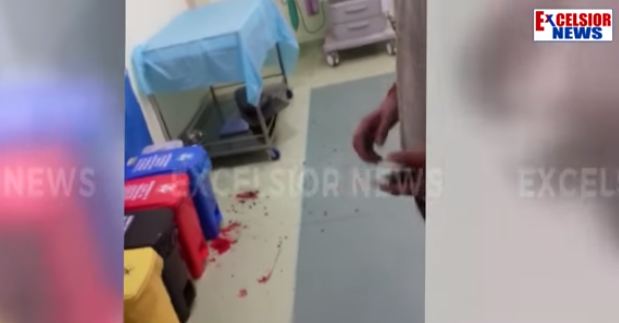 KATRA, May 23: A young Nurse at Narayana Super Specialty Hospital Kakryal, near Katra, was found brutally murdered by her male colleague, who also attempted suicide by cutting blood veins of both his wrists after committing the crime, here today.
The throat slit body of the deceased Nurse was lying in a pool of blood in Cath Lab of the Hospital where the accused Nursing Staff member was also found in an injured condition, early this morning around 6.30 a.m.

Click here to watch video
The deceased, namely Vishali (23), daughter of Ram Lal of Dharamshalla (Himachal Pradesh) and the accused, identified as Pawan Chouhan (23), son of Sita Ram of Gazipur (Uttar Pradesh) were Nursing Orderlies of Narayana Super Specialty Hospital Kakryal and had been working together, said SSP Reasi, Tahir Sajad Bhat.
According to Additional SP Katra, Naresh Singh, the matter came into notice of the Police this morning around 7.30 a.m when an information was received from Narayana Super Specialty Hospital Kakryal by I/C PP Kakryal that one staff nurse namely Vishali has been found dead in Cath Lab of the Hospital along with an other injured nursing staff member namely Pawan Chouhan, who has cut blood veins of both his wrists.
“Pawan Chouhan is under treatment and  being questioned while  dead body of Vishali has been shifted to CHC Katra for post-mortem and  other legal formalities,” the ASP  further said and added that a case FIR No 94/2018 U/S 302 RPC has been registered in this connection  at Police Station Katra.
Even as during the preliminary investigation, the accused is learnt to have claimed that he was in love with the deceased and both of them decided to commit suicide because of family hurdles in their union, the circumstantial evidences hint that he raped the victim and then slit her throat with a surgical knife.
However, Police was tightlipped over alleged rape of the deceased before her murder and only maintained that nothing could be said till the post mortem report was received.
Investigation of the case is being carried out by SHO Katra, Inspr Surinder Paul Singh under the close supervision of ASP Naresh Singh. Police has also seized the weapon of offence.
Meanwhile, according to an official spokesman of the Narayana Hospital, one of their  Nurse’s was found lifeless at around 6.30 am in the Hospital  Cath Lab. “The cause of demise is being investigated by the Police and we  are cooperating with the investigating agency and providing all the necessary information,” the statement added.

Abolition of interview to check malpractices in recruitment: Dr Jitendra

DB seeks details regarding conduct of Amarnath Yatra amid COVID-19