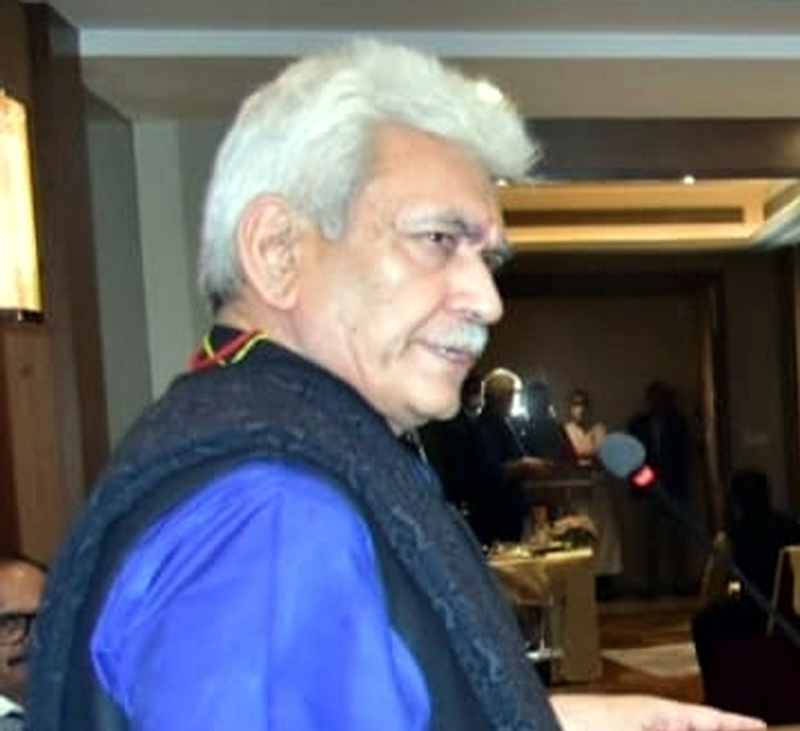 Excelsior Correspondent
LUCKNOW, Dec 13: Lieutenant Governor, Manoj Sinha today addressed a commemoration event for the upcoming birth anniversary of Pandit Madan Mohan Malaviya, organised by Mahamana Malaviya Mission, Lucknow.
On the occasion, Sinha paid tributes and remembered the teachings and values propagated by Bharat Ratna Pandit Madan Mohan Malaviya.
He observed that Malaviya made an invaluable contribution to the Indian Renaissance, nationalist ideology, public awakening, welfare, justice and freedom, and in the fields of education and spirituality.
Malaviya always emphasized on the upliftment of the last man in the queue and improvement in socio-economic condition of the country, he added.
In his address, the Lt Governor also spoke on the present situation and development scenario of Jammu and Kashmir. He observed that after August 2019, all the constitutional rights have been extended to 1.25 crore people of J&K in its truest sense. He said that a new era of development has been ushered in the UT by Prime Minister Narendra Modi.
He said that for decades the Valmiki community, Tribals, Gorkhas, Daughters of J&K, West Pakistani refugees and backward classes were treated as second-class citizens. Such rules were made that a sweeper’s son and daughter can only become a sweeper. The talents of the poor were stifled with manufactured restrictions, he added.
Referring to various discriminatory laws and provisions being run in the erstwhile state, Sinha said that now all those laws of discrimination have been abolished. Tribal population has been provided due rights under the Forest Rights Act; three-tier Panchayati Raj system has been implemented for the first time in J&K and elections were conducted in the most fair and transparent manner.
He said that with decisions taken in the last two years under the guidance of the Prime Minister, top priority is being given to the equitable and holistic development of all sections, and the areas which were kept backward since independence have been included in the mainstream development. The policies that have been implemented on the ground after 2019 have brought social justice to all sections for the first time since independence, he added.
Underlining that everyone is being provided opportunities to lead a better life irrespective of religion, caste, class, the Lt Governor said that countless schemes have been started for the youth in the economic, social, and educational fields, and a host of opportunities have been created for women to become independent and successful.
He observed that mechanization and reforms done in J&K’s agriculture and horticulture sector in the last two years has resulted in substantial increase in the monthly income of the farmers, much higher than the national average.
The Lt Governor observed that it is due to transparent, responsive, corruption-free, and accountable administration that the common man is feeling connected with the journey of development and prosperity in J&K. “Now every penny that is spent for development is accounted for and the details of every project are kept in public domain,” he added.
The Lt Governor also elucidated great strides achieved by the UT administration in the past two years in the health, tourism and industrial sectors.
“All the rights enshrined in the Constitution are being extended to the citizens, and Jammu Kashmir is now moving towards becoming a strong pillar of Aatma Nirbhar Bharat,” the Lt Governor said.
Devendra Swaroop Shukla, Secretary, Mahamana Malaviya Mission, office bearers of Narayan Seva Sansthan and large number of people were present on the occasion.