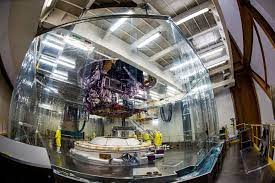 Washington, Dec 22: NASA is delaying the launch of the James Webb Space Telescope mission from French Guiana from Friday, December 24 to Saturday, Christmas Day, the US space agency announced in an update.
[D]ue to adverse weather conditions at Europe’s Spaceport in French Guiana, the flight VA256 to launch Webb – initially scheduled for December 24 – is being postponed,? NASA said in the update on Tuesday. The new targeted launch date is December 25, as early as possible.
The new proposed launch window time on Saturday will be between 7:20 a.m. and 7:52 a.m., Washington, DC time, which is between 9:20 a.m. and 9:52 a.m. local launch time in Kourou, the update said.
NASA and Arianespace successfully completed the Launch Readiness Review for the James Webb Space Telescope on Dec. 21. The team authorized the Ariane 5 rocket carrying Webb to rollout and the start of launch sequencing for the mission, the update added.
On Wednesday evening, another weather forecast will be issued in order to confirm the date of December 25. The Ariane 5 launch vehicle and Webb are in stable and safe conditions in the Final Assembly Building, according to NASA.