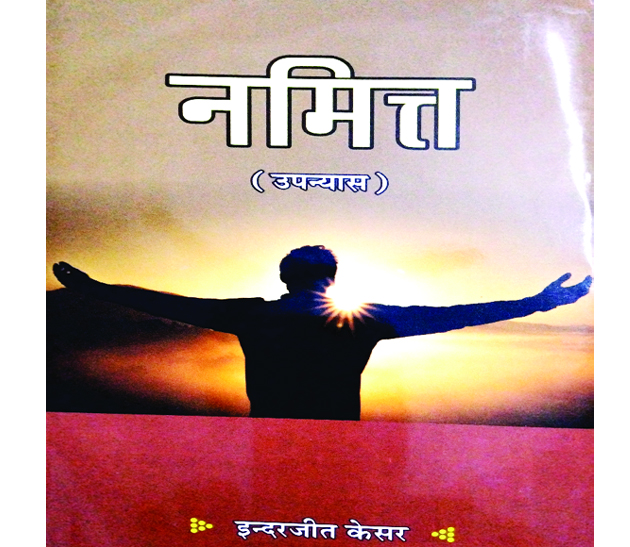 Suman K Sharma
Inderjeet Kesar’s latest Dogri novel, Namitt (Jai Mata Prakashan, ChhanniHimmat, Jammu, 2022), could be summarised in ten words: ‘Be good and the world would be good to you.’
The word ‘namitt’ (Hindi,’nimitt’),hasmeanings such as’cause’ and’motive’,et cetera (https://www.shabdkosh.com). In the novel, Corona infection becomes the prime cause of the narrative. Gapaal is a young clerk in the government revenue department. Shortly after his marriage with Asha, his mother Leelo is struck with Corona.Fearing the menace, the bride does not need much persuasion of her older brother, Ram, to quietly return to her parental house. Leelosuccumbs anyway to the infection in the city hospital, in spite of the best efforts of Gapaal, his sister Kunti and Kunti’s husband, ASI Vinod Kumar. The Corona epidemics again causesGapaalto be quarantined for a fortnight as a matter of precaution. On discharge, he finds himself all alone and homeless. The novel ends, however,on a happy note. The strong familial ties and his own innate goodness more than restore to him everything that he had lost because of the cunning of his policeman-jijaji.
The textmakes a marathonnarration from page one to the last. The worthy compositor has economised even on paragraphing the dialogues. Content-wise, however, the novelmay be roughlydivided into three parts:the beginning till Leelo’s death; the sharp twistwith its laboured resolution; followed by restitution of the protagonist to his rightful place in the society. The progression is leisurely, much like the even flow of a deep river. Except forthe relatively shortpassage concerning the twist-in-the-tale (85-94), which quickens the pace likethat of a river descending a slope, the movement of the narrative is imperceptible. Even so, Kesar never lets the interest of the reader flag.
He has achieved this feat by virtue of profusion of detail, and his mastery overDogri language.His whole-hearted concern to detail is well illustrated by the longish passage regarding the marriage of Gapaal and Asha (25-45). The author has taken pains to describe not less than a dozen wedding rites in the traditional Dogra community, from ‘thaka’ to the wedding nightthrough ‘shagan’, ‘geetan’,’saant’, ‘butna’, ‘buhada’, ‘jaani’ and so forth. It would be of interest to a non-Dograreader that aDogra wedding has not one but two ‘veds’ (sacred canopies) for the wedding, ‘andarli’ (internal) and ‘baharli’ (external).
In the hands of a less-competent narrator, that detailing-in-depth would have badly affected the readability of Namitt. After all, it is a work of fiction; neither a sarkari report, nor a research paper on the rites of marriage of the Dogra community. Kesar, happily, is adept at the use of Dogri language. Eminent Dogri scholar, Dr Om Goswami, in his introductory note, has applauded him on adopting the basic Dogri phraseology and the use of Dogri idioms. At the same time, being an astute literary critic that he is, Dr Goswami has cautioned the author against the use of inapt or obsolete words (8-11).
Characteristically, Kesar maintains his authorial voice throughout the text. So tight is the authorial control over the characters that poor Gapaal has to go without a mobile phone till such time as the furtherance of the plot demands it. In contrast, his wife, Asha, carries her phone all the time, again for the sake of the plot. Plot in the novel is more important than any of the characters.
Another device that Kesar has used to ensure cohesion of the text is to unobtrusively insert hints about what he would be narrating in detail in later pages. For instance, in the first two pages of the text (17-18), he informs the reader that (a) Gopal has got married recently, (b) his mother Leelo is indisposed and (c) his bride Asha is a teacher in a government school. Such clues work well both the ways. They give the author the ground to flesh them out as and when he deems fit and carry forward the narration. To the reader they help in co-relating the succeeding passages with what s/he has already been told.
ReadingNamittcan prove a rewarding experience on a leisurely Sunday. Awork of fiction, it also serves the dual purpose ofturning a spotlight on the Dogra ethos. For that it may well be called an allegory rather than a novel.