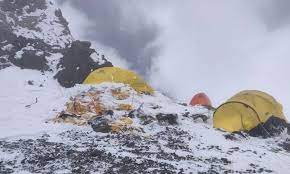 Islamabad, Sept 12: Mounds of trash are piled up on K2, the second highest peak in the world.
One of the most difficult peaks to summit, it is a popular site for mountaineers. This year, it hosted a record number of climbers.
As soon as we reached Camp 1 on the K2, in front of us was pile upon pile of trash which included corpses, abandoned ropes, tin packs, tents, climbing gears, human waste and plastic wrappers, said Wajid Nagar, recalling that the garbage looked as fresh as if it had been discarded seconds ago.
Most of this trash was found in camps 1, 2, and 3 of the K2.
When you reach there, it is the smell that hits you first, even before the stunning view. It is nauseous kind of rotten, The Dawn reported him as saying.
Sarah Strattan, an American mountaineer who arrived in Gilgit-Baltistan in June for a K2 summit, had similar concerns.
Camps 1 and 2 were the worst with trash old tents, gear, food packaging, fuel cans, human waste, old ropes,” she told Dawn.com. And you camp right on top of it.
Camps 3 and 4, Strattan went on, were a little better but not pristine, adding that there was also trash littering the climbing route.
She explained that the trash created many problems for climbers, especially when it came to sanitation. We melt the snow for water in all camps and if the snow is dirty, it can make us sick.
Another important thing here is that the trash is visually unappealing. Climbers come to the mountains because they are beautiful and the trash is its opposite, which leaves us feeling angry, sad, and frustrated, Strattan added.
The mountaineers said the amount of trash piled up there couldn’t be brought down in a day or by a handful of people. It would need another expedition. A K2 cleanup expedition.
Yasir Hussain, director of the Central Karakoram National Park, told Dawn.com that a team of eight climbers was sent to collect trash from the K2 basecamp all the way up to Camp 4, which is located at a height of 7,800 meters.
The cleanup mission commenced on July 19 and was completed on August 18.
During this period, the team ended up collecting 1,610 kg of trash which included climbing gear, tents, ropes, cylinders, batteries and shopping bags, Hussain said.