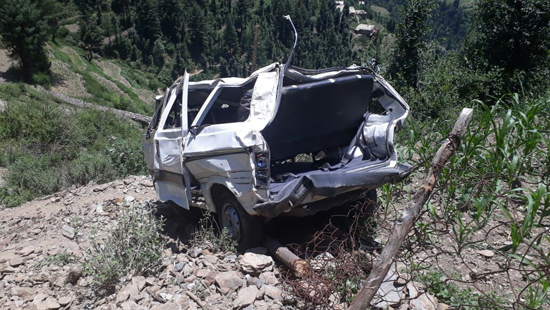 Excelsior Correspondent
DODA/KISHTWAR, June 13: Three persons including mother-son duo were killed, while 10 others were injured in road accidents today.
As per police sources, a Maruti Omni van bearing registration number JK06A-1698 was on its way to Padri from Bhaderwah, when the driver lost control over the vehicle and it plunged into gorge near Khanni Top on Bhaderwah-Chamba road, resulting into on the spot death of two persons and serious injuries to seven others.
After getting information, police team rushed to the spot and with the help of locals rescued the injured persons and also retrieved the bodies of the dead persons.
All the injured persons were rushed to Sub District Hospital Bhaderwah, from where four injured persons were airlifted to Government Medical College and Hospital (GMCH) Jammu in Indian Air Force (IAF) chopper for advanced treatment.
The bodies of the deceased identified as Maana Devi (52), wife of Narayan Singh and her 26-year-old son Mukesh Kumar, residents of Chattra, Tehsil Bhaderwah have been handed over to legal heirs for last rites.
The injured have been identified as Manju Devi (35), wife of Surinder Singh, her two sons Krish Raina (11) and Harish Raina (14), residents of Roun Domail District Udhampur, Shiv Devi (55), wife of Bhawani Dass, her two sons Ranjeet Kumar (26) and Satish Kumar (17), residents of Tangorna-Chattra and Priya Devi (22), daughter of Surinder Kumar, a resident of Mathola.
A case under FIR Number 88/18 under Sections 279, 337 and 304-A RPC has been registered at Bhaderwah Police Station and investigation started.
Meanwhile, one person was killed and three others injured, when the Alto car (JK17-6204), they were traveling in, fell into gorge at Dhundi Morh, falling under the jurisdiction of Atholi Police Station.
On getting information, police team rushed to the spot and shifted the injured persons at Atholi Hospital, where they were undergoing treatment, when last reports came in.
The body of the deceased identified as ex-police cop Girdhari Lal (60), son of Janki Dass of Atholi was retrieved from the gorge and handed over to family members for last rites after conducting autopsy.
The injured have been identified as Daleep Singh (54), son of Bharat Singh of Atholi, Suresh Kumar (45), son of Radha Krishan of Sohal Padder and Sanjeet Kumar (32), son of Hans Raj of Atholi.
A case under relevant Sections has been registered at Atholi Police Station and investigation started.