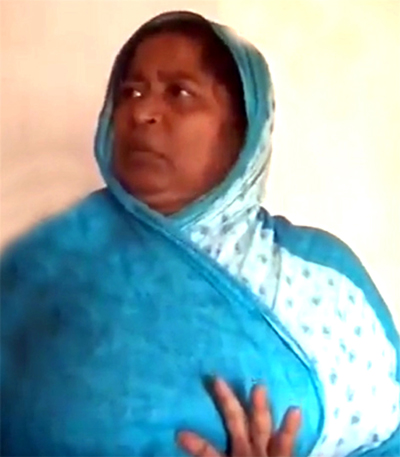 GUWAHATI, Apr 10:  A missing youth from Assam is suspected to have joined militant outfit Hizbul Mujahideen in Jammu and Kashmir after his photo in which he was seen holding an automatic rifle surfaced that prompted his mother to say Government should shoot him dead.
After the photo went viral in the social media, the Assam Police today said it has started a probe into the matter and is trying to find out if the youth identified as Qamer Uzzaman has joined the terrorist organisation.
In the photo, Qamer, who hails from Jamunamukh in Nagaon district, is seen holding an automatic rifle. A caption of the photo appeared to suggest that he is a member of the Hizbul Mujahideen.
The caption says, “Org: Hizbul Mujahideen; Name: Qamer Uzzaman; S/O Ibrahim Zaman; R/O: Assam India; Code: Dr Hurairah; Qul: MA English.”
Director General of Police Mukesh Sahay said Assam Police is in touch with its Jammu and Kashmir counterpart.
Special DGP Special Branch Pallav Bhattacharyya said it was difficult to confirm whether Qamer has joined the underground group and that the State police has taken up the matter with J&K Police for a detailed investigation.
Qamer’s mother recognised the youth in the photo as of her missing son and said the Government should shoot him dead for being a traitor.
“Yes, he is my son Qamer. If he has joined the militant organisation, the Government should shoot him dead as he is an enemy of the country. His body should be fed to animals. I don’t need such a son. Such a person should not be living,” she told reporters at her home.
A mother of five, she claimed Qamer had left home saying he was going to Kashmir to start a business and has maintained no contact with the family for the past 10 months.
Qamer’s wife and three-year old son were with him till he returned to drop them 10 months ago at Jamunamukh where he was constructing a house, his brother Mufidul said.
“I now don’t consider him as my brother. He should be killed as he is a traitor. We won’t allow even his body to be brought inside our house,” Mufidul said.
He said Qamer had studied up to class 10 and is not an MA as claimed in the photo.
The family had also gone to Jammu and Kashmir last year to file a police report that he was missing, Mufidul said.
Former Jammu and Kashmir Chief Minister Omar Abdullah took to twitter to take note of the incident.
“An MA in English & reportedly has come all the way from Assam to become a militant in Kashmir. A few days ago my security people had told me about his presence around Srinagar,” he said. (PTI)