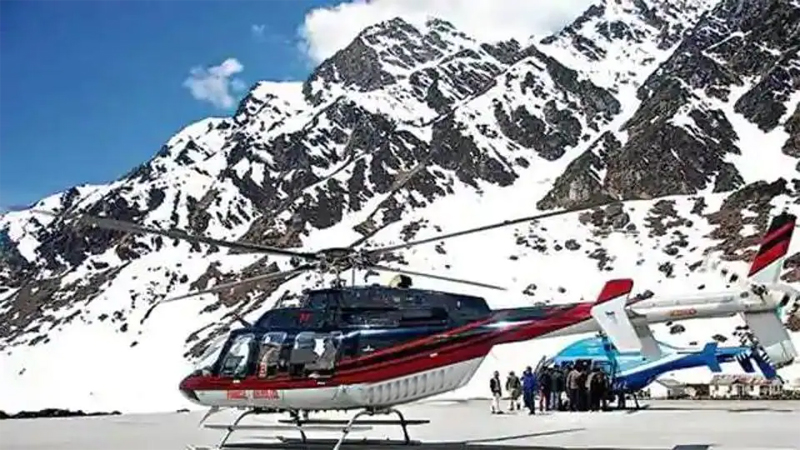 JAMMU, Nov 11: The Government of India has approved Rs 25 crore for construction/upgradation of 40 helipads in the Union Territory of Ladakh including two Hangars for stationing of helicopters. Most of these helipads and one Hangar at Sindhu Ghat in Leh have been completed.
Construction of such a large number of helipads and two Hangars gained significance as they come amid ongoing tension between Indian and Chinese militaries along the Line of Actual Control (LAC) in Eastern Ladakh.
“An amount of Rs 25 crore has been approved for construction and upgradation of more than 40 helipads in both Leh and Kargil districts and two Hangars for stationing of helicopters–one each in two districts of the Union Territory of Ladakh. Most of these helipads and one Hangar at Sindhu Ghat, Leh have been completed,” the Union Ministry of Home Affairs (MHA) annual report on Ladakh, said.
The helicopter services have turned out to be of immense benefit for the people of Ladakh.
The MHA report said under the subsidized helicopter service scheme, two helicopters are being operated by Pawan Hans Limited in various sectors of Ladakh through Online booking system. About 3600 passengers have availed the helicopter services and more than 60 critical patients and emergency evacuations have been airlifted by the UT administration through the helicopter services, it added.
As per the report, following commissioning and strengthening of 220 KV Srinagar-Leh transmission line, there has been a major improvement in reliable power supply in Ladakh and five DG sets have been phased out by providing Grid connectivity during 2021-22 as a step towards carbon-neutral Ladakh.
“Work on 220 KV transmission line from Phyang to Diskit, Nubra and Drass to Padum, Zanskar has been started with a project cost of Rs 1309.72 crore. With completion of the transmission line, Nubra and Zanskar will get 24×7 power supply through the Grid,” the MHA report said.
It added that a 50 MW Solar Power Project at Taru, Leh approved under Prime Minister’s Development Plan (PMDP), has been taken up by the SECI for execution and completion of project will reduce load on 220 KV Srinagar-Leh transmission line during winter and also during peak demand.
The Transport Department of Ladakh has also taken steps towards carbon-neutral Ladakh by procuring 10 electric buses for public transport, of which, two are already in operation in Ladakh. In addition, the Transport Department is also procuring 10 electric cars inclusive of solar charging car port during current financial year for use in the Government, as per the report.
The Government has also undertaken various developmental initiatives for empowerment of Panchayats under SDP, State Plan and Centrally Sponsored Schemes which are at various stages of execution.
Major components towards development of rural infrastructure include Panchayat Ghars, BDC and BDO offices in every block and Common Facility Centres for providing internet enabled G2C services in all 193 Panchayat Ghars at a cost of Rs 5790 lakh. Construction of 27 CFCs has been completed.
The MHA report said Ladakh Gram Sadak Yojana is a UT initiative toward providing road connectivity to all Panchayats and Panch Wards of Ladakh under which 71 roads are being constructed and 30 roads have been completed this year.
“As an initiative towards data connectivity, V-SAT and internet facilities in all 193 Panchayats are being provided under Bharat Net. IT infrastructure for all Panchayats and Block Development Councils have been provided under Rashtriya Gram Swaraj Abhiyan schemes and SDP respectively,” the MHA report said.
It said a strategy document for achieving carbon-neutral and resource efficient Ladakh is being prepared by the Union Ministry of Environment, Forest and Climate Change.
To ensure clean energy and to phase out Diesel Gen Sets from UT of Ladakh, 50 MW Solar Power Plant with battery storage is being set up at Phyang, Leh, with an estimated cost of Rs 385 crore by the Solar Energy Corporation of India (SECI) and work shall start from the next financial year. A tripartite MoU between ONGC, UT administration & LAHDC, Leh has been signed for the first geo-thermal Field Development Project at Puga. Besides, a 7.5 GW Solar Power Project (5.0 GW in Pang, Leh & 2.50 GW in Zanskar Kargil) is being planned by the SECI,” the report said.
It said the electric vehicle (E-bus) have been introduced in Leh for public transport on pilot basis and Hydrogen Fuel Cell Vehicles (five passenger buses & five cars) are to be introduced on pilot basis.
MoU was signed with in house facility for generation of Hydrogen using solar power at Chuchot, Leh. Two solar lift irrigation schemes have been commissioned for use of clean energy in the Agriculture, sector. Solar street lights have been installed in Gram Panchayats of Leh district. In Kargil district, the installation of solar, street lights is in progress, it added.