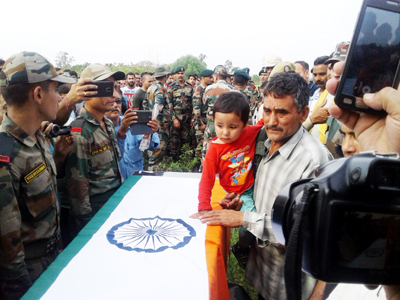 Avtar Bhat
KATHUA/KHOUR, Apr 10: The mortal remains of two Army martyrs of JKLI who laid down their lives in shelling from across the border in Sunderbani Sector of Rajouri district late last night, were consigned to flames with full military honours in their respective villages of Sanyal in Hiranagar tehsil of Kathua district and Danapur village in Akhnoor tehsil of Jammu district today.
Thousands of mourners including the family members and relatives of martyrs joined the funeral processions at both the places. They were presented a Guard of Honour before they were given the last adieu. The wreaths were laid on their bodies by Army, police officers and local leaders of respective areas.
The bodies which were wrapped in Tri-Colour were brought to their villages in a big procession and the mourners were raising slogans in the praise of their heroic deeds and against Pakistan.
The body of martyr Jaki Sharma was brought from Hiranagar Morh in a procession of motorcyclists to the village Sanyal where heart rendering scenes were witnessed as words fail to console the family members including the young wife of the soldier Rajni Devi and his mother.
Click here to watch video
Rafileman Jaki Sharma was married four years back and he had a two year old son Tanav who was unable to comprehend the magnitude of the tragedy which has befallen the family. Jaki Sharma had joined his unit over a week back after availing the leave for some time and at that time his family had never thought that he would not return alive now and it would be not last visit to his family.
He had constructed second story of his house during the days when he was on leave and the family had many dreams to fulfill but God has something else in store for it, said a relative of the martyr in a chocked voice.
The father of the martyr Dharamvir Sharma, an ex soldier said that Jaki Sharma was his old age support and he has lost it. He however said that he feels proud of his brave son who was always ready to face the enemy from front and he did that by embracing death as a valiant soldier is expected to do.
Sharma however was critical of the Government policy and said that how long will this go on? “The Government is saying that it is giving a befitting reply to enemy but our jawans are also attaining martyrdom. The Government should adopt such measures so that peace can prevail on borders once and for all”, he added.
The scene at village Danapur in Jourian Akhnoor was more horrible as Rifleman Vinod Singh, 24, was the only son of his parents. They had two other daughters. He was unmarried while his one sister is married and another is also unmarried. The all plans of family dashed to ground with the martyrdom of Vinod.
His father Ajit Singh also an ex officer in Army was in a great shock. He said that instead of daily ceasefire violations and cross border firing, the Government should go for a decisive war once for all so that the people are relieved of this daily tension.
With their supreme sacrifices, these two martyrs proved beyond doubt that they belonged to martial race of valiant Dogras.
Wedded to serve the nation and lay every drop of blood for protecting its boundaries, these two brave sons of the soil, rewrote the history of making their motherland  to feel proud of its sons.
Coincidently both the jawans have the family history of serving the army rather it was  deep rooted in their traits as the fathers of both the martyrs are retired army personnel.
While the father of Rifleman Jaki Sharma, Dharamvir Sharma had also retired from army as a soldier, the father of Rifleman Vinod Singh, Ajit Singh has retired as a Captain.
The families have so strong bond with army that Jaki Sharma’s younger brother Rahul Sharma is also serving the army and is posted in Ladakh at present. Being far away from his home he could not attend the last rites of his brother today.
The pal of gloom descended both the villages as the news spread. The family members of both the martyrs were shocked after hearing the news.
SSP Kathua, Suleman Choudhary, MLA Hiranagar Kuldip Raj and other senior civil and Army officers were present during cremation at Sanyal village while senior army,  civil and police officers were present in village Danapur during the cremation.
Meanwhile, Union Minister of State in PMO,  Dr Jitendra Singh has expressed his profound shock and grief over the loss of lives of two promising army personnel from the State. While condoling their demise, he said they made a supreme sacrifice and it will not go waste.
Dr Jitendra Singh, who was in Tripura also deputed district president BJP, Kathua Prem Nath Dogra to represent him at funeral procession in village Sanyal in Kathua district.