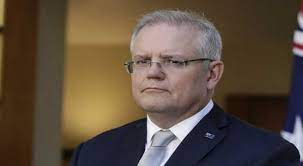 Canberra, Feb 20: Australian Prime Minister Scott Morrison on Sunday condemned the laser incident by Chinese warship on an Australian Air Force jet and said it was an “act of intimidation” by Beijing.
On Saturday, Australian Defence Department said, “On February 17, a P-8A Poseidon detected a laser illuminating the aircraft while in flight over Australia’s northern approaches.
“The laser was detected as emanating from a People’s Liberation Army ? Navy (PLA-N) vessel. Illumination of the aircraft by the Chinese vessel is a serious safety incident.
“Acts like this have the potential to endanger lives.”
The Guardian quoted the PM as terming the incident as “a reckless and irresponsible act that should not have occurred”.
He also demanded China to provide an explanation “as to why a military vessel in Australia’s exclusive economic zone would undertake such an act such a dangerous act”.
“I can see it no other way than an act of intimidation, one that was unprovoked, unwarranted. Australia will never accept such acts of intimidation,” he added.