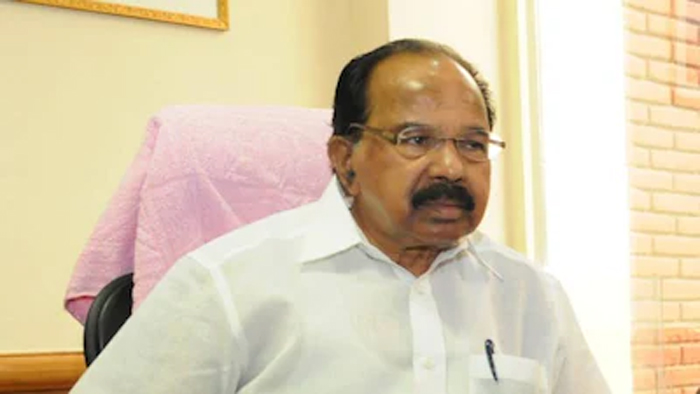 NEW DELHI, Nov 29: Senior Congress leader M Veerappa Moily today attacked Law Minister Kiren Rijiju over his remarks on the issue of appointments of judges, saying the comments were in “total defiance” of the law of the land and it was “unbecoming” of the Minister to “throw a challenge” to the Supreme Court.
Moily, a former Law Minister, said the collegium system is “time-tested” and in view of the law minister’s “obstructionist and defiant” policy, Prime Minister Narendra Modi would have no option but to sack him.
Moily’s remarks came a day after the Supreme Court expressed “anguish” over the delay by the Centre in clearing the names recommended by the collegium for appointment as judges in the higher judiciary, saying it “effectively frustrates” the method of appointment.
When senior advocate Vikas Singh referred to media reports on a statement by the Union Law Minister on the issue of appointments, the top court’s bench had said, “When somebody high enough says let them do it themselves, we will do it ourselves.”
“It is crossing the rubicon by keeping the names pending like this,” the court observed.
In a statement, Moily said the concern expressed by the Supreme Court on the comments made by the law minister is an “eye opener” to every law-abiding citizen of the country on the independence of judiciary.
“The collegium system is time-tested and every citizen or even the Government has no other option but to abide by the law laid down by the Supreme Court. The ironical comment of the Law Minister on the matter of appointment of judges is in total defiance of the law of the land,” the Congress leader said.
“It is unbecoming of the Law Minister to throw such challenge to the Supreme Court of India. How can the democracy of the country survive with such open defiance? Any Minister of the Government will have to work in consonance with the oath of office he has undertaken as a Minister,” he said.
Moily said the nation should know whether it is the collective opinion of the cabinet that the law minister aired.
“No Law Minister can afford to have a personal view in the matter of law of the land. The Prime Minister owes an explanation to the nation on this critical and crucial issue confronting the nation. It is not for the first time such confrontationist attitude is taken by the present or the earlier law minister; such irresponsible utterances go on unabated in the NDA regime,” he said.
The Supreme Court struck down the law of Parliament on judicial appointments in 2015 and allowed the old collegium system to operate, he said.
If the NDA Government is not happy with the Supreme Court verdict of 2015, it can as well bring out a new law in Parliament for appointment of judges, the former Law Minister said.
Such processes cannot be done with an attitude of confrontation but through appropriate consultation with the judiciary and legal luminaries, he added.
If the Government does not agree with the recommendations of the collegium on appointment of Judges or Chief Justices of High Courts, it may be sent back to the collegium or authorities involved in appointment process, Moily said. (PTI)
“But holding back the recommendations of the collegium indefinitely or repeatedly making such references to the collegium is not in accordance with the norms laid down by the Supreme Court from time to time,” Moily said.
Rijiju on Friday had launched a fresh attack on the mechanism to appoint Supreme Court and high court judges, saying the collegium system is “alien” to the Constitution.
Speaking at the Times Now Summit, he had said one should never say government was sitting on files.
“Then don’t send the files to the Government. You appoint yourself and you run the show,” Rijiju had said. (PTI)