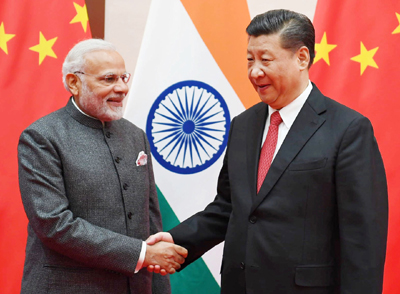 QINGDAO, June 9:  Taking forward the positive momentum in bilateral ties, Prime Minister Narendra Modi and Chinese President Xi Jinping today held “very substantive” talks during which they agreed to hold the next informal summit in India next year besides resolving to continue efforts to ensure peace and tranquility along the border.
The two leaders also decided to set up a new mechanism for people-to-people cooperation to build on the momentum in bilateral ties from their unprecedented informal summit in Wuhan nearly six weeks back.
The meeting took place ahead of the Shanghai Cooperation Organisation (SCO) summit and covered key aspects of the bilateral engagement, reflecting the resolve by the two countries to reset relations and bring back trust in their ties, hit by the Doklam standoff and several other thorny issues.
“Met this year’s SCO host, President Xi Jinping this evening. We had detailed discussions on bilateral and global issues. Our talks will add further vigour to the India-China friendship,” Modi tweeted after the meeting.
Foreign Secretary Vijay Gokhale said one of the important outcomes of today’s meeting was that the Chinese side accepted Prime Minister’s invitation to President Xi to come to India for an informal summit next year, similar to the one held by the two leaders in Wuhan on April 27-28.
Xi conveyed to the Indian side that China’s Defence Minister and Minister of Public security, who is equivalent to India’s Home Minister, will visit New Delhi this year.
Sharing some aspects of the nearly 50-minute meeting, the Foreign Secretary said Xi described the Wuhan summit as a “new starting point” in bilateral relations between the two countries while Prime Minister called it as a “milestone” in ties which will help in developing mutual understanding and trust.
Gokhale said the meeting had a “very positive forward looking momentum” which was underpinned by spirit of the Wuhan summit.
“It was a very substantive meeting. And both leaders made very positive assessment of the Wuhan summit,” he said, adding both the leaders agreed to keep open the strategic communication.
The two leaders also deliberated on initiating a joint project in Afghanistan which will be in the sphere of capacity building.
President Xi said their Wuhan meeting had been well received by both countries and the international community, and a positive atmosphere is taking shape to pay close attention to and support the development of China-India relations.
Talking about the outcome of the meeting, Gokhale said both the sides agreed to set up a new people to people mechanism to enhance cooperation in several areas such as art and culture.
“On the Indian side, it will be headed by the External Affairs Minister (Sushma Swaraj) while on Chinese side, it will be headed by state councilor and Foreign Minister Wang Yi. The first meeting of this mechanism will be held this year,” he said.
In this context, Xi also referred to growing popularity of Indian films in China and particularly mentioned about films Dangal and Bahubali.
The two leaders covered issues relating to peace and tranquility along the boundary and agreed that militaries on the two sides will continue to talk to each other to maintain peace, said Gokhale calling the meeting “very positive and forward looking”.
After talks between the two leaders, the two sides inked an MoU on sharing hydrological information of the Brahmaputra River by China to India and another pact to facilitate export of non-Basmati rice from India to China.
He said next round of Special Representative-level talks on boundary question will be held during second half of this year.
At the meeting, the Chinese side also agreed to import high-quality agricultural products from India and said they will also allow Indian pharmaceutical products Chinese market.
Meanwhile, India and China have decided to set up a new “people to people mechanism” to build on the momentum in bilateral ties from the Wuhan Summit.
The decision to step up people to people contacts was announced by Foreign Secretary Vijay Gokhale during a press briefing.
“During the Wuhan summit, the two countries had also decided that people to people contact and people to people exchanges were a significant part of the relationship going forward that we needed to build better synergies through various means including films, culture, yoga, traditional Indian medicine, art, museum, and so on,” Gokhale said.
“And in that context, the two leaders have agreed that a new people to poeple mechanism will be set up. It will be headed on the Indian side by the External Affairs Minister and on the Chinese side by the State Council and Foreign Minster Wang Yi and the first meeting of this P to P mechanism will be held this year,” he added.
He said one of the important issues discussed in that context was Indian films, with President Xi in fact referring to the growing popularity of Indian films in China.
Xi not only mentioned “Dangal”, but also cited “Baahubali” and “Hindi Medium” as films which have been screened in China and received popular accalaim, the Foreign Secretary said.
According to information on the External Affairs Mnistry wesbite, China was one of the co-sponsors to the UN resolution designating June 21 as the International Day of Yoga.
At present, the Indian community in China is around 35,500. A major part of this comprises students (over 18,000), who are pursuing courses in various universities in China.
A number of Indians and persons of Indian origin (PIOs) are also working as professionals with various multinational and Indian companies in China, it says. (PTI)