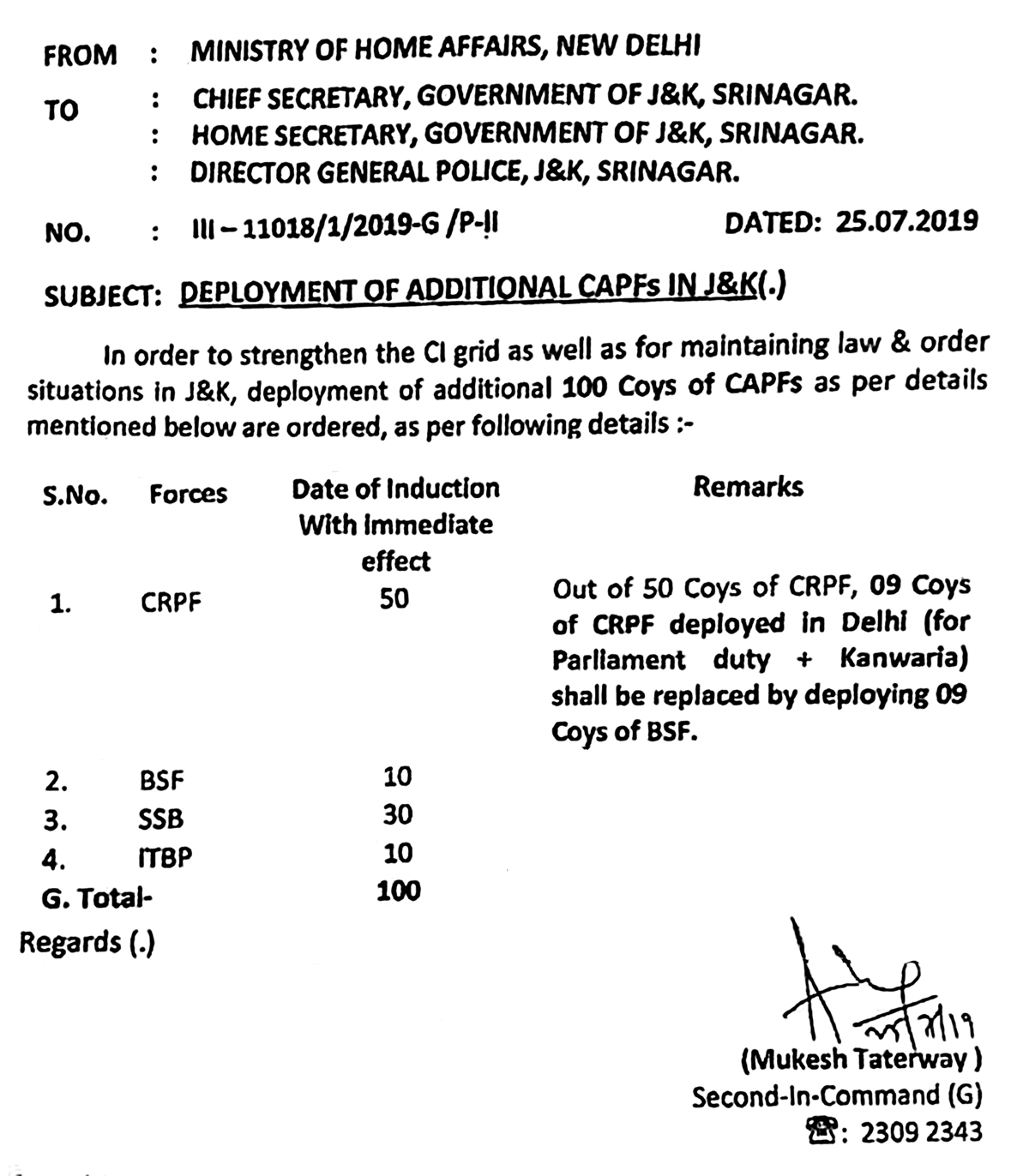 Neeraj Rohmetra
JAMMU, July 26: Barely a day after the conclusion of National Security Advisor, Ajit Doval’s two-day visit to Kashmir, the Union Ministry of Home Affairs today ordered deployment of 100 more companies of Central Armed Police Forces (CAPFs) in Jammu and Kashmir, which will be used to strengthen the Counter Insurgency (CI) Grid and maintain law and order situations in the State.
Director General of Police (DGP) Dilbag Singh told the Excelsior that additional 100 companies of para-military were being deployed across the Valley including North Kashmir, Road Opening Parties (ROPs) and for further strengthening security of ongoing annual pilgrimage of Shri Amarnath Ji shrine besides general law and order duty across the State.
“We had sought 200 additional companies of CRPF from the Union Home Ministry. However, today, they agreed to give 100 additional companies. We are quite confident to get another 100 additional companies for the State soon to further beef-up security arrangements and give boost to the Counter-Insurgency Grid,” Dilbag said.
Significantly the MHA order came a day after Ajit Doval concluded his two-day visit to Kashmir. Though Doval didn’t hold any review of security situation officially, he was understood to have been briefed by top brass of civil and police administration.
An official order of the MHA accessed by the Excelsior revealed that the Centre has approved 50 additional companies of Central Reserve Police Force (CRPF), 10 from the Border Security Force (BSF), 30 of Sashastra Seema Bal (SSB) and 10 from the Indo-Tibetan Border Police (ITBP).
Soon after the order for deployment of 100 additional companies of CAPFs was received, Advisor, Incharge Home, K Vijay Kumar and Chief Secretary BVR Subrahmanyam held high-level meeting in Srinagar with top brass to discuss deployment of the companies.
The Chief Secretary later held another meeting with Home Secretary Shaleen Kabra on deployment of the para-military companies.
The deployment, sources said, has been finalized and will begin forthwith.
An order issued by Second-in-Command (G), Mukesh Taterway said 100 additional companies of the para-military forces are being deployed in Jammu and Kashmir to strengthen the Counter Insurgency Grid as well as for maintaining law and order situation in Jammu and Kashmir.
Sources said the State administration would use additional para-military companies to strengthen its positions in North Kashmir, where there was less presence of the para-military personnel in view of their deployment for Shri Amarnath Ji yatra duty.
“In view of ongoing 46-day long pilgrimage, large number of Central Armed Police Forces have been deployed along Jammu-Srinagar National Highway to provide fool-proof security to the pilgrims,” sources said, adding that presence of the para-military forces along Jammu-Pathankot National Highway was also high as compared to previous years.
They said after arrival and deployment of 100 additional companies of para-military forces, the State administration will further take up the issue of 100 more companies for the State to further strengthen the Counter-Insurgency Grid and enhance para-military deployment in the areas, where presence of the CAPF jawans was less.
It may be mentioned here that the para-military companies sent by the Central Government in Jammu and Kashmir for peaceful conduct of Parliamentary elections had also stayed back and were being used for Shri Amarnath Ji pilgrimage.
Forty-six day long Amarnath Ji yatra had started this year on July 1 and will culminate on August 15 coinciding with Shravan Purnima and Raksha Bandhan. Union Home Minister Amit Shah had reviewed Shri Amarnath Ji yatra security in Kashmir before start of the pilgrimage.
Sources expressed confidence that deployment of 100 additional companies of Central Armed Police Force in the Kashmir valley will also help in intensifying anti-militancy operations and maintain law and order situation.