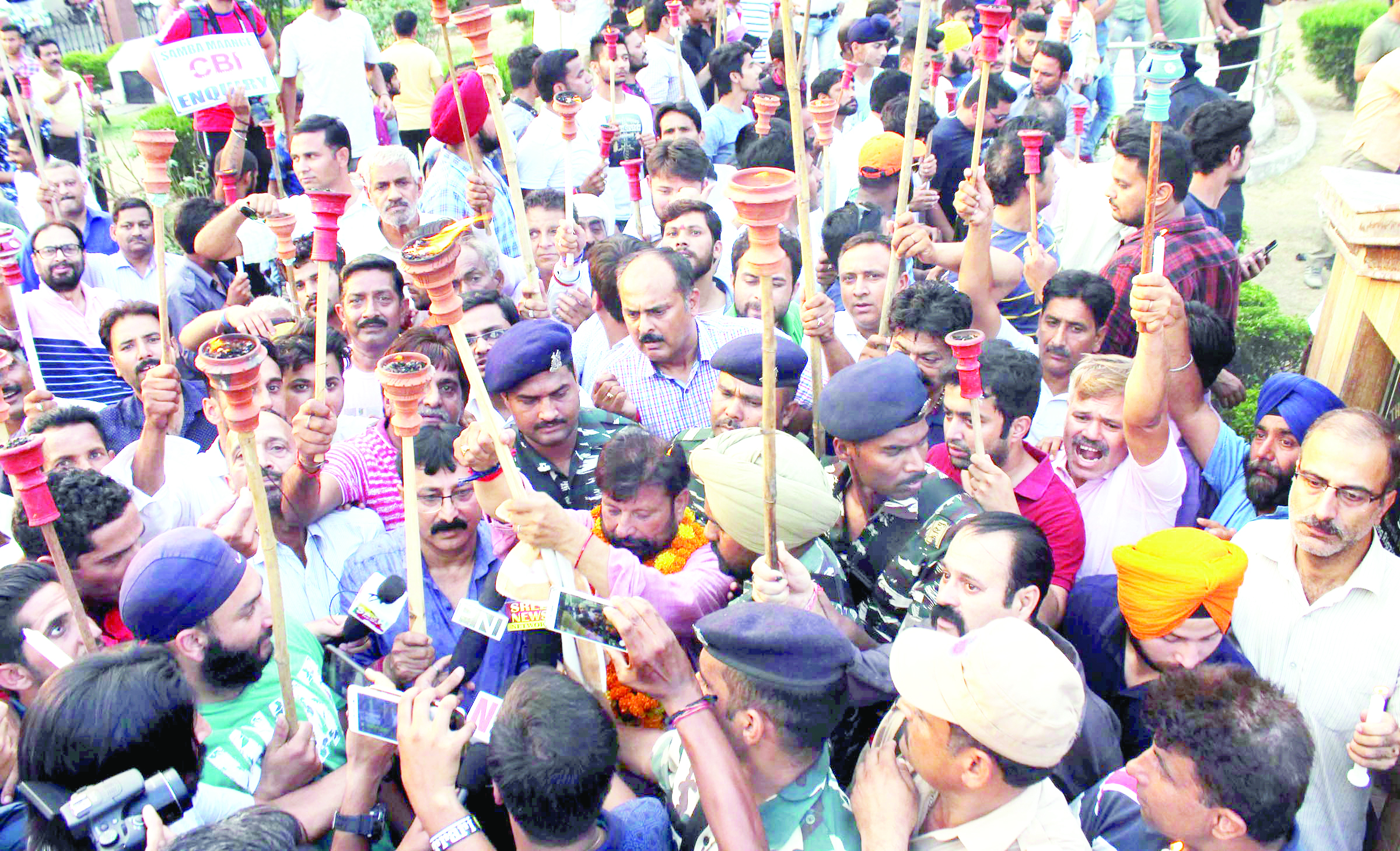 Excelsior Correspondent
JAMMU, June 10: Former Minister and senior BJP leader Ch Lal Singh, supported by civil society,  members from trade bodies, students, lawyers  and social organizations took out a massive ‘Mashal rally’ here this evening.
A sea of people,  taking burning Mashals in their hands,  marched from Indira Chowk to Parade Ground, giving  reply to  all those who labeled Dogras  as ‘ pro-rapist’, hate-mongers, communal  etc. while referring to Rassana case.
Addressing large gathering at Parade Ground, Ch Lal Singh said, ”  We are demanding CBI  inquiry in  Rasana case since people of Jammu region have raised serious questions on the manner in which Crime Branch of Jammu and Kashmir Police has conducted the probe. They have serious doubts. They are aggrieved and agitated.  They are  broken and angry. They are appalled over the silence of the  State Government. Why their side of the story is not being taken into account?”  Singh maintained.
”  We are applauded for our secularism and patience. We are expected to tolerate worst kind of discrimination and regionalism. We are expected to stay silent and accept every slur without raising our voice. Demand for CBI probe in Rasana case is being interpreted as a miscarriage of justice for the reasons best known to those who ordered CBI probes as and when they found situation going out of hand in Kashmir valley, where we are fighting both terrorists and separatists,” Lal Singh added.
“I ask why did the State Govt  in the past approached CBI for cases where they found public opinion divided and people agitated in Kashmir valley.  Why was CBI approached by the State Govt  in 2003 Pathribal case, 2006 Kashmir Sex Scandel, 2009 Shopian  rape and murder, and killing of 4 Air Force officers in the year 1990? High Court of Jammu and Kashmir handed over the investigation of the 2008 Mehran Latif  case to CBI. If the agency was trustworthy in the cases pertaining to Kashmir valley, why the same is being questioned in this Rasana Case? Jammu is asking and those in power should respond and give people straight reply,”  Lal Singh said.
He claimed that  Dogras of Jammu region would not rest till the CBI probe is  ordered by the Government.