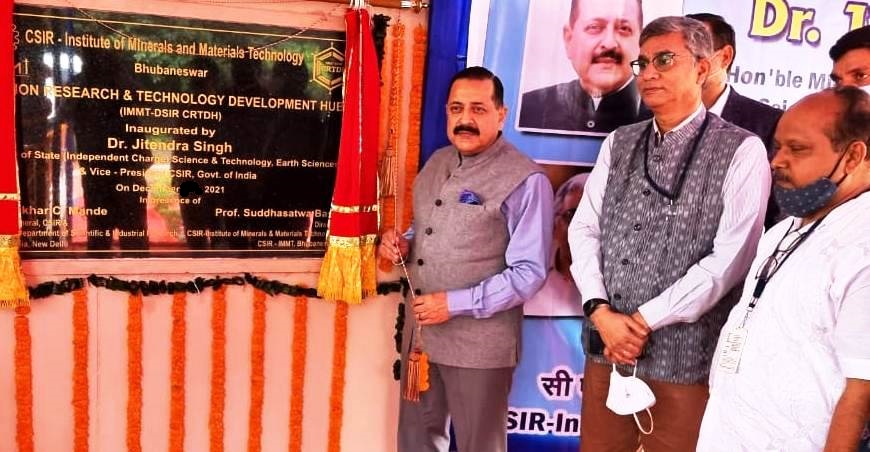 BHUBANESWAR (ODISHA), Dec 5 : Union Minister of State (Independent Charge) Science & Technology; Minister of State (Independent Charge) Earth Sciences; MoS PMO, Personnel, Public Grievances, Pensions, Atomic Energy and Space, Dr Jitendra Singh today said that marine minerals from coastal and ocean sources will be key to India’s future economy. In addition, he said, metals like nickel and cobalt play an important role in promoting renewable energy technologies needed to fight the climate change challenges.
Inaugurating the new building facilities at CSIR-IMMT (Institute of Minerals & Materials Technology) here, Dr Jitendra Singh told the scientists and students that IMMT is a R&D Lab of national importance in minerals and materials technology under the aegis of CSIR to address the problems of industry for their sustainable development.
Dr Jitendra Singh said that India has emerged as one of the frontline nations in marine scientific research under Prime Minister Narendra Modi and now actively engaged in exploring the resourceful ocean bed for meeting the country’s future energy and metal demands. He said, the “Deep Ocean Mission” initiated by the Modi government heralds yet another horizon to various resources to enrich the “Blue Economy”.
Dr Jitendra Singh said that steps are being taken for close coordination and collaboration between IIMT and NIOT (National Institute of Ocean Technology), Chennai for accelerated progress in developing India’s blue economy and harnessing its ocean resources. He said, efforts are on for development of suitable technologies for effective mining of some of the deep-sea mineral resources and exploitation of gas hydrates resources.
It may be recalled that in October this year, the Minister launched India’s First Manned Ocean Mission Samudrayan at Chennai to carry out deep ocean exploration of the non-living resources such as polymetallic manganese nodules, gas hydrates, hydro-thermal sulphides and cobalt crusts, located at a depth between 1000 and 5500 meters.
Dr Jitendra Singh said that over the last seven years, the main thrust of R&D at CSIR-IMMT has been to empower Indian industries to meet the challenges of globalization by providing advanced and zero waste process know-how and consultancy services for commercial exploitation of natural resources through the public- private-partnership (PPP) approach. He said that such engagement and the technological intervention provided to industry has made CSIR-IMMT, the first choice for many of the minerals and extractive metallurgy based industries. It is also carving out a niche in processing of advanced materials for greater value addition and working on resource use efficiency of critical raw materials, he added.
The Common Research and Technology Development Hub (CRTDH) has been established at CSIR-IMMT by the joint effort of CSIR-IMMT and Department of Scientific and Industrial Research (DSIR), Government of India in order to provide, technological solution, to mentor entrepreneurs/startups, alongside facilitating incubation of startups. Its primary objective is to nurture and promote innovations in MSMEs and provide them R&D or knowledge-based support in the area of new materials, chemical processes etc.
Currently, under the CRTDH program, many collaborative projects with Metallurgical/Agro/Boiler/Electronic/Minerals- MSMEs/Start-ups, focusing on development of new materials, coatings, agro-waste to wealth (K-enriched fertilizer), electronic waste to wealth (recovery of precious metals) etc are being undertaken. It has provided more than 4 number of technological solutions to agro and metallurgical/minerals industries and 10 know-hows related to fighting against COVID like sanitizers, liquid soap, disinfection kits etc. to around 14 MSMEs since its inception.
Transmission Electron Microscope (TEM) is a high-end characterization equipment which has been procured to create an advanced characterization facility in order to augment R&D activities of the institute with latest developments. It is capable of evaluating material structures, phase composition, and texture etc. at nanoscales.