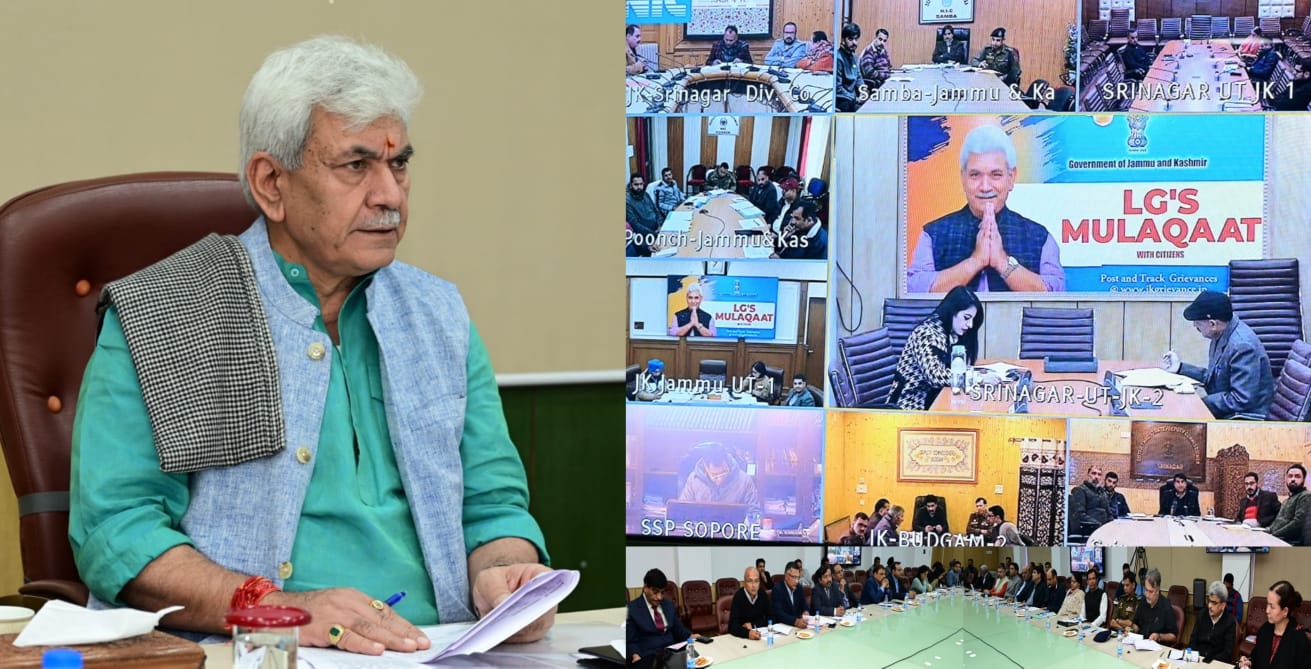 JAMMU, NOVEMBER 30: Effective handling of complaints and grievances is fundamental to accountability and prompt resolution of public concerns in a timely & cost-effective way, said the Lieutenant Governor Manoj Sinha while interacting with people during the latest edition of “LG’s Mulaqaat”- Live Public Grievance Hearing programme, at the Civil Secretariat today.
The Lt Governor directed the officers to strengthen public confidence. He also passed on-spot directions to resolve their complaints.
People want to be heard and expect quick action from the administration. LG’s Mulaqaat has emerged as a people-friendly platform, which enables & values complaints & ensures grievances are handled promptly and accountability is fixed for further improvements, the Lt Governor observed.
Listening to people first is the top priority of the administration. The ease of conversations through LG’s Mulaqaat stimulates different departments to support citizen-centric system that provides seamless and integrated public services to meet the increasing societal expectations, said the Lt Governor.
Feedback system on complaints handling have ensured equitable, objective, and unbiased process. All the departments are working in an efficient, effective, integrated, and coherent manner with increased citizen participation, he added.
Noting that Deputy Commissioners and SPs are the face of the administration, the Lt Governor called upon officials to discharge their responsibilities and serve the common man with utmost sensitivity, besides adhering to the timelines of developmental projects and ensuring close synergy between different government agencies to achieve optimal results on the ground.
Taking serious note of grievances regarding delays in issuance of revenue extracts, the Lt Governor directed all the Deputy Commissioners to personally monitor the extension of revenue services.
On the issue of damaged building of Government Middle School, Gadyara, Ramban, the chair was informed by the concerned Deputy Commissioner that the said school has been declared unsafe during the safety audit. He further informed that the school has been included among the unsafe schools by the Union Ministry for the repair and reconstruction works.
Similarly, an applicant namely Sumair Javed Khan drew the attention of the authorities to the dilapidated condition of the road from Rajouri town to Baba Ghulam Shah Badshah University. The Lt Governor assured the applicant that the administration was aware of the issue and necessary action in regard has already been initiated to provide relief to the people at the earliest.
On the issue of functioning of the street lights at Pahalgam raised by an applicant namely Showkat Ahmad from Anantnag, concerned officers briefed the chair on the measures taken to address this issue with alacrity.
During the interaction, most of the randomly selected applicants expressed their gratitude to the Lt Governor for prompt redressal of their grievances by the authorities.
On the occasion, the Lt Governor directed the DCs and other officials to coordinate with the Science and Technology Department for effective implementation of PM-KUSUM (Pradhan Mantri Kisan Urja Suraksha evam Utthaan Mahabhiyan) scheme, and installation of solar pumps and roof top solar panels.
Rehana Batul Commissioner/Secretary, Public Grievances informed the chair about the progress and status of grievances received on JK-IGRAMS.
Dr Arun Kumar Mehta, Chief Secretary; Atal Dulloo, Additional Chief Secretary, Agriculture Production Department; Mukesh Singh, ADGP Jammu; Administrative Secretaries; Deputy Commissioners; SSPs; HoDs and other senior officers, in person and virtually, were present during the interaction.