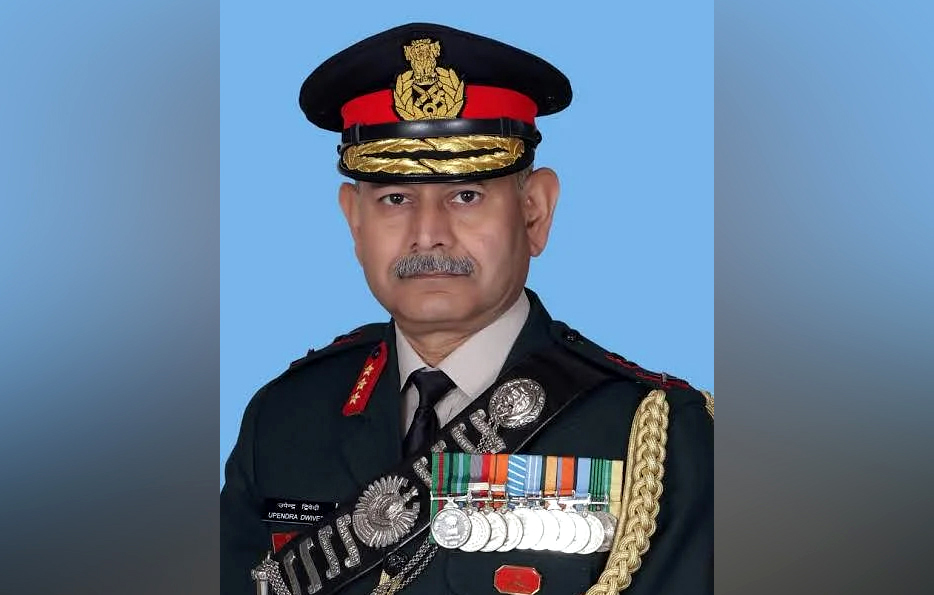 JAMMU, May 16: Northern Army Commander Lieutenant General Upendra Dwivedi today said the targeted killings of Kashmiri Pandits and non-local labourers by militants was to keep terrorism alive in Kashmir.
He also said Pakistan created a facade of proxy ‘tanzeems’ (outfits) to give an indigenous colour to the insurgency in the Valley after the country faced pressure internationally to stop sponsoring terror activities in Jammu and Kashmir.
Terror organisations like The Resistance Front (TRF), Peoples’ Anti-Fascist Front (PAFF), Gaznavi Force, United Liberation Front, Geelani Force, Lashkar-e-Mustafa, Lashar-e-Islam and Jammu and Kashmir Freedom Fighter have been claiming responsibility for terror attacks, particularly selective killings of Hindus in the valley, during the last one-and-a-half-year, as per the reports.
“Due to active diplomacy, there has been tremendous international pressure on Pakistan to put a stop to sponsoring terror in J&K. Consequently, a facade of proxy tanzeems was created to give an indigenous hue (to militancy in Kashmir),” Lt Gen Dwivedi, General Officer Commanding-in-Chief of the Northern Command, said.
He said in the recent past, militants have targeted non-local labourers, Kashmiri Pandits and other contributors of peace, prosperity and well-being of Kashmir, which goes to show that frustration is setting in among the orchestrators of violence and “they are getting desperate”.
“Their actions are causing grave human right violations and degrading Kashmiriyat,” Lt Gen Dwivedi said.
He said notwithstanding a few aberrations, people are aware and they have awakened and developed the courage to negate the nefarious designs of anti-national elements.
“I see Jammu and Kashmir regaining its past glory and sustaining the hard-earned peace through sacrifices of the security forces and people,” the Army commander said.
He said the successes on the anti-terrorist front are reflections of higher standards of professionalism and jointness among the security forces.
“This has led to frustration among the perpetrators of proxy war and desperation to prove that terrorism is alive (in Kashmir),” he added.
Lt Gen Dwivedi further said as a result of extraordinary synergy among the security agencies and the forces, especially the Rashtriya Rifles and other organs of the Government, the situation in the hinterland of Jammu and Kashmir has seen a tremendous improvement since August 2019.
“There has been a considerable improvement in all the parameters of terrorism and violence,” he said adding this has led to frustration among the terrorist leadership and their cross-border mentors.
He said the incidents of attacks against non-local labourers and Kashmiri Pandits have been analysed and appropriate steps are being taken to neutralise these threats.
“The overall situation is progressively improving due to the proactive Rashtriya Rifles-gridded deployment leading to a positive and conducive environment for accelerating the developing initiatives of the Government,” the Army Commander said.
He said dividends of peace have started reaching the people and they are further getting motivated to preserve and sustain it.
As per reports, as many as 17 Kashmiri Pandits (KPs) and non-locals have been killed by militants in Kashmir after the special status of J&K was revoked in 2019. In 2021, three KPs, one Sikh and five non-local labourers were killed.
Ten KPs and non-local labourers have been shot at and injured by terrorists in South Kashmir and Srinagar so far this year.
Three Kashmiri Hindus have been targeted since March this year. Two of them –Satish Kumar Singh and Rahul Bhat, a revenue department employee — were killed in the attacks. A Kashmiri Pandit, Bal Krishan, who did not migrate in the 1990s and ran a medical shop, was also shot at and injured in Shopian in April. (PTI)