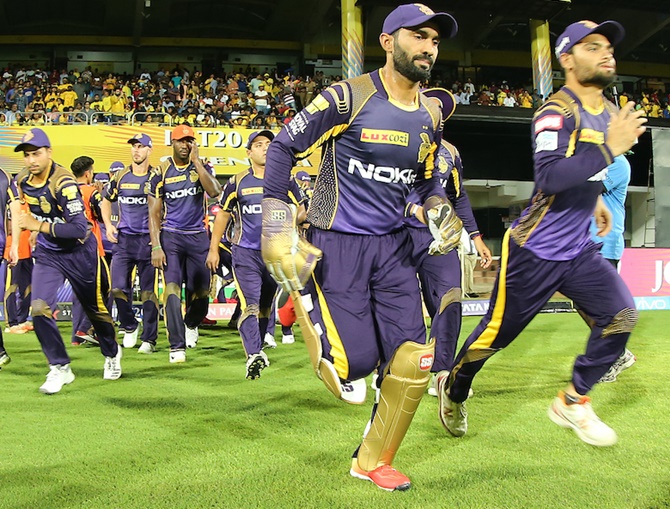 KOLKATA: Skipper Dinesh Karthik will face a big test when a struggling Kolkata Knight Riders lock horns with a resurgent Delhi Daredevils, led by double title winning former KKR skipper Gautam Gambhir, in a much-anticipated IPL clash here tomorrow.
After back-to-back defeats, Karthik-led KKR will be desperate for a revival, while Delhi will hope to continue their momentum after snapping a two-match losing streak in style against Mumbai Indians yesterday.
Kolkata had made a winning start to their campaign against Royals Challenger Bangalore but successive defeats to Chennai Super Kings and Sunrisers Hyderabad in the next two matches have put them in a spot of bother.
Delhi, on the other hand, lost to Kings XI Punjab in their opener and then went down against Rajasthan Royals in a rain-hit match. But the Gambhir-led side bounced back in style against Mumbai with Jason Roy smashing an unbeaten 91 in his debut match for DD.
DD’s Kolkata leg fixture means their Team India speedster Mohammed Shami is all set to return to his home town for the first time after his wife had accused him of infidelity and domestic abuse last month — a controversy that had hogged the headlines.
In the latest development, Jahan has filed a case at Alipore court on April 10 and Shami has been summoned within 15 days.
Shami has turned out in all the three matches for DD and a team official said there’s no question of his availability.
On the field, it will be Gambhir who will have the upper hand despite DD’s poor 8-12 head-to-head record against KKR.
Gambhir, who was associated with KKR since 2011, has better knowledge of the conditions and he will be keen to make a point against his former franchise, who did not retain him this year.
Included in the DD side at the expense of Colin Munro, Roy showed his prowess with a sizzling display as the Englishmen smashed his career best T20 score to pull off a tricky last ball victory.
Gambhir can heave a sigh of relief after their batting combination clicked following some experimentation in the first two matches. He too would like to score some runs against his former franchise.
As DD look to climb up the table, KKR will be keen to arrest their slide and they will have to do a lot of soul-searching — first and foremost would be to get their batting organised.
Bringing in-form Sunil Narine down the order did not help their cause and he might be back at his opening slot. KKR also need to back the Under-19 World Cup winning duo of Shubman Gill and Shivam Mavi.
The youngster duo didn’t get enough time in the middle to prove themselves as Gill, primarily a No 3 batsman, came only at No 7, while Mavi’s raw pace and energy were left untested as he was not introduced during the Powerplay.
Karthik would also hope that his deputy Robin Uthappa, who is a KKR veteran, shoulders more responsibility with the bat as his scores of 13, 29 and 3 have been a big letdown.
Asked to open, Uthappa looked clueless particularly against Bhuvneshwar Kumar and it remains to be seen whether he would open again with DD boasting pace duo of Trent Boult and Shami up front.
It’s also high time that Karthik backs his skill and makes an impact before questions are raised about his captaincy as he would be under immense pressure in one of the biggest tests of his career.
Squads:
Kolkata Knight Riders: Dinesh Karthik (c and WK), Sunil Narine, Andre Russell, Chris Lynn, Robin Uthappa, Kuldeep Yadav, Piyush Chawla, Nitish Rana, Prasidh Krishna, Shivam Mavi, Mitchell Johnson, Shubman Gill, R Vinay Kumar, Rinku Singh, Cameron Delport, Javon Searless, Apoorv Wankhade, Ishank Jaggi and Tom Curran.
Delhi Daredevils: Gautam Gambhir (c), Rishabh Pant, Shreyas Iyer, Chris Morris, Glenn Maxwell, Kagiso Rabada, Amit Mishra, Shahbaz Nadeem, Vijay Shankar, Rahul Tewatia, Mohammad Shami, Trent Boult, Colin Munro, Daniel Christian, Jason Roy, Naman Ojha, Prithvi Shaw, Gurkeerat Singh Mann, Avesh Khan, Abhishek Sharma, Jayant Yadav, Harshal Patel, Manjot Kalra, Sandeep Lamichhane, Sayan Ghosh.
Match starts 2000 IST. (AGENCIES)