REASI, Sept 20: Union Minister of State for Power and Heavy Industries, Krishan Pal Gurjar today visited district Reasi and took stock of various projects in the district.
The Minister inspected the Salal power project wherein the officers gave a power-point presentation to him. He appreciated the activities being undertaken by the NHPC, under Corporate Social Responsibility.
With respect to instituting an elected Government in the region, the minister said that the Centre is already working hard to make ground for robust democracy in J&K.
Talking to media persons, the Minister said that the UT Government and the Centre are working on multiple projects to raise the power generation capacity of the region two-fold within the next five years. It is the mission of PM Narendra Modi to turn J&K into a power surplus state within this short period, he said. The minister further said that the Government is working expeditiously in multiple sectors including roads, railways, and funding numerous developmental projects in J&K. Click here to watch video
Allaying apprehensions about privatisation and surge in electricity rates in the future, the Minister assured that all economic factors would be considered to ensure that the people of Jammu and Kashmir get quality power supply at cheap rates.
The minister was accompanied by Principal Secretary Power Development, Rohit Kansal, Deputy Commissioner Reasi, Charandeep Singh, General Manager NHPC, Nana Ram and SP Reasi, Surjit Singh among other senior district officers.
Meanwhile, Minister started 2-day tour of Rajouri and inspected the progress on GMC Rajouri being executed by the PWD at an estimated cost of Rs 139 crores. The concerned officer briefed the Minister about the physical financial status of the project in detail.
The Minister directed the concerned officers to ensure that the project is completed within the decided time frame so that the public is provided necessary health benefits with the completion of the project. He also asked for maintaining transparency in the execution process.
Among the others, DDC Rajouri, Rajesh K Shavan; DIG, Vivek Puri; Additional Private Secretary to Minister, Vikas Shukla; SSP, Sheema Qasba Nabi; ADC, Sachin Dev Singh; Principal GMC, Brij Mohan Gupta; ACR, Tahir Mustafa Malik; SE PWD, Javaid Maqbool; SE Jal Shakti, JP Singh; ACD, Sushil Khajuria besides other concerned officers accompanied the Minister during his visit.
DDC Member Dhangri, Rameshwar Singh; BDC Chairperson Dhangri, Tazeem Akhter besides PRI members and people from all sections of life were present on the occasion.
During his visit to panchayat Upper Dhangri, the locals also apprised the Minister about a number of issues and demands of their areas and sought immediate redressal of the same. The Minister gave a patient hearing to all the issues and demands raised on the occasion and assured the public that all their genuine concerns would be redressed in a time bound manner.
The Minister also inspected a number of developmental works including 07 Kms PMGSY Peo Malayala road and 57 meter span bridge. The Minister asked for completing the work on the projects within the set timelines to provide necessary benefits to the locals.
He said that the Government has launched a number of schemes and welfare programs for the welfare of the general public and urged upon them to avail the benefits of the same.
“The Government is committed to ensure full transparency and accountability in its functioning and all possible measures are being taken to make all the basic facilities at the doorsteps of the common masses so that no one is deprived of getting their basic rights”, the Minister said.
Meanwhile, to review the developmental scenario of the district, the Minister also chaired a meeting of the concerned officers in the Conference Hall of the PWD Dak Bunglow.
He directed the Executing Agencies to speed up the work on the developmental projects and ensure that they are completed within the already set timelines and also regularly monitor the pace and maintain quality while executing the developmental projects.
The Ministry also convened a meeting of the public representatives and prominent citizens and discussed the issues of the areas of their respective jurisdictions. The meeting was attended by the DDC Chairman, Naseem Liyaqat; Vice Chairman DDC, Shabir Khan besides DDC Members and BDC Chairpersons also attended the meeting.
The PRIs during the meeting apprised the Minister about a number of issues and demands of their areas including augmentation of water and power supply, macadamization of roads, better health care facilities besides other related issues were discussed threadbare in the meeting.
The Minister while addressing the PRIs said that they act as a bridge between the public and the Government and urged upon them to make best possible efforts to take their areas to new heights of development.

India to be Global Bio-manufacturing Hub by 2025: Dr Jitendra 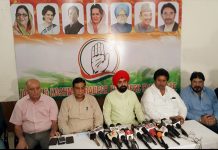