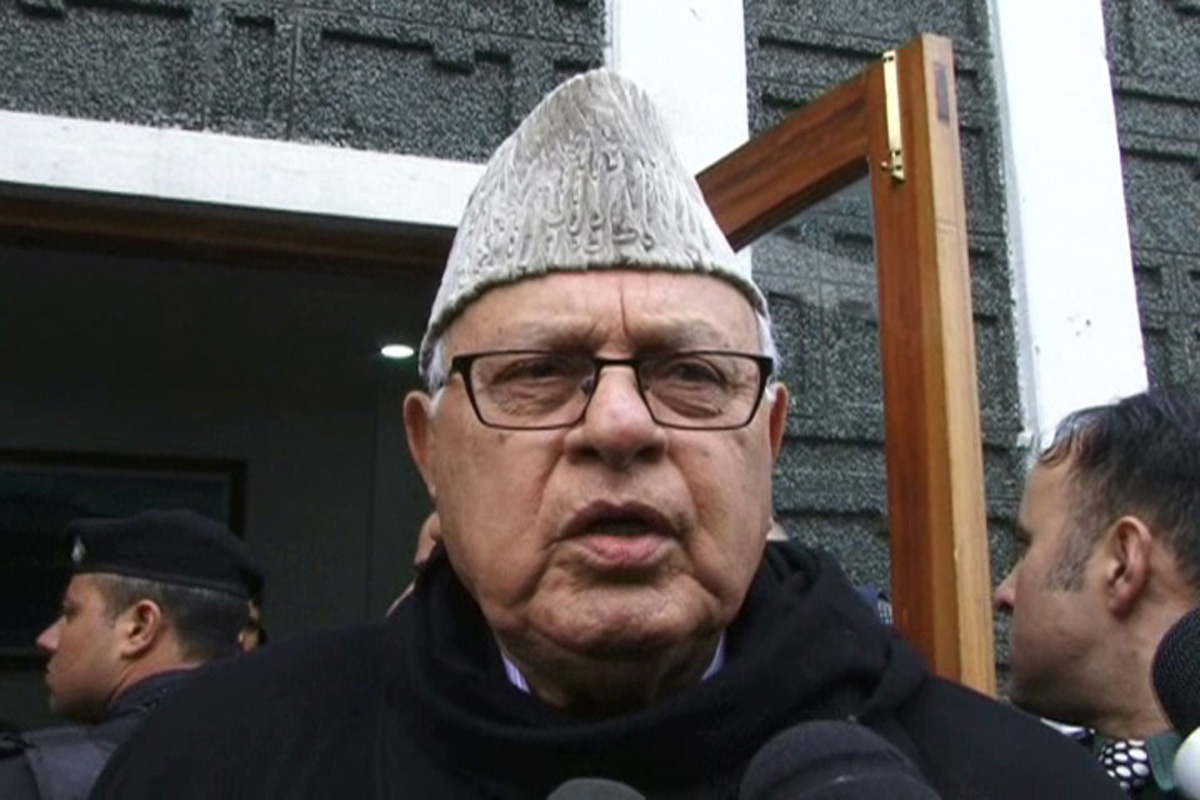 ‘Move to take over JK Bank was in pipeline for long’
Excelsior Correspondent
Srinagar, Dec 5: Former Chief Minister and president of the National Conference, Dr Farooq Abdullah, today said he is confident that India and Pakistan leadership will resolve Kashmir and peace will return.
Speaking at a function marking 36th annual day of SKIMS at SKICC in Srinagar today, Abdullah said that time has come for the resolution of Kashmir issue. “I see a change between the Indian and Pakistani leaderships. I am quite confident that time has come, that is why probably God has kept me alive, to see solution emerging to this problem of our State and I hope we have peace which we all want,” he said.
The NC president said that he wanted to walk freely without any security in the Valley. “I want to walk freely without any security. My daughters, my friends, my colleagues and people in this State could work without any tragedy. I hope it will happen and I hope you all will pray for this that we have that situation,” he said.
Dr Abdullah said that only democratically elected Governments will advance the cause of development and work for the socio-economic emancipation of the underprivileged. “I look forward to elections for the State Assembly at an earliest. Only a popular Government can mitigate the mounting woes of the people. And it is the duty of people to elect honest people to the Legislature,” he said.
Later speaking to reporters, Abdullah said that the moves to take over the Jammu and Kashmir Bank have been in pipeline for a long time. “The moves to take over the J&K Bank had been in pipeline for a long time. They haven’t succeeded till then but probably in the Governor’s rule they thought they will succeed,” he said.
The former Chief Minister said that there were plans to take over the bank when he was the Chief Minister of the State. “I think there was a design long time earlier when I was the CM and J&K Bank was working well. I remember then I was in the office of then Home Minister L K Advani along with Deputy Chairman Planning Commission and they were saying the bank is not good it is going down and it should be taken over,” he said.
“Luckily, a daily from Mumbai had published a complete report on this bank and showed how good it was. I sent those reports to them and I am glad that the Deputy Chairman Planning Commission spoke to me on the phone and said his information was wrong,” Abdullah said.
The NC president said that the autonomy of the bank should not be fiddled with. “But any Government that will come after Governor’s rule is over will have to look into this. Nothing should be done to the autonomy of JK Bank,” he said.
Expressing his dismay over the attack on the secular visage of India, the NC President said: “Many powers that are inimical to the secular character of India are making bigoted attempts to polarize the people on religious lines to garner support. This I believe is dangerous for a country like India which belongs to all.”
“People want answers for all those fanciful promises that were made by BJP. People cannot forget the ordeal that they had to undergo due to demonetization. Small businessmen and small enterprise holders too are at the receiving end due to the promulgation of GST,” he said.