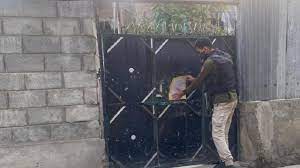 Not only are the Over Ground Workers (OGWs) providing support of various hues to militants as much accused before the law as the terrorists themselves but even those house owners who kept their houses at the ”disposal ”of militants and, therefore, harbouring them as accused inviting , therefore, seizures and attachment of such houses. It is in the same way that someone, out of whatever consideration, provided shelter and refuge to an accused wanted by the Police for a crime committed or was a fugitive or having taken part in any criminal act.
Recently , as many as 5 such residential houses which were used for harbouring and providing logistics to the militants were attached by the Police located in Parimpora, Pantha Chowkh, Nowhatta and Zakoora areas of Srinagar in Kashmir division as evidence beyond any doubt confirmed involvement of these house owners in helping and sheltering the ones having taken to gun to kill innocents in cold blood and indulging in acts of violence. It is evident that from these ”assured” hideouts , militants conspired and planned various targeted killing of civilians and acts of violence against the security forces. It is therefore in the interests of the people themselves not to provide any support to militants least providing shelter in houses as such acts could land in grave peril legally the owners of such houses and of other places of shelter.