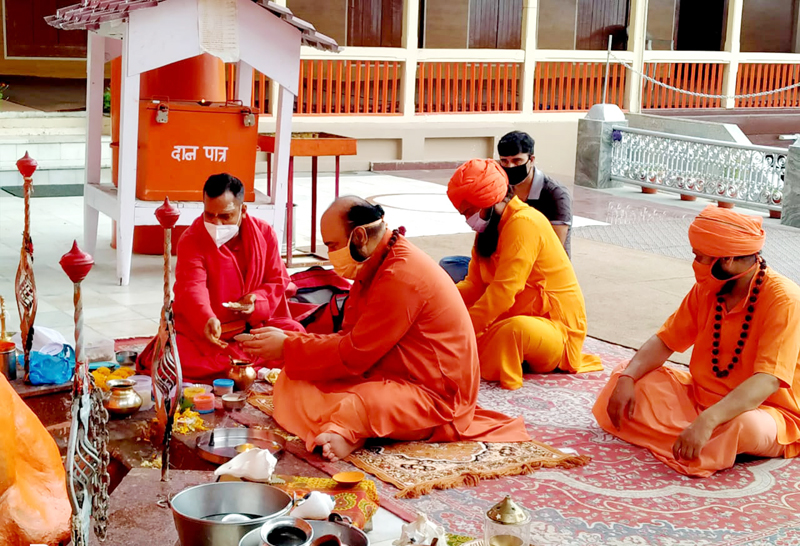 JAMMU, July 31: Though the annual pilgrimage of Shri Amarnath Ji was cancelled this year by the Government and Shri Amarnath Shrine Board (SASB) due to alarming spread of COVID-19 pandemic all over the country as well as in J&K, the Chhari Mubarak of Lord Shiva and Goddess Parvati will perform the darshan at holy cave as per routine on Shravan Puranmashi falling on August 3.
This was stated by Mahant Deependra Giri Ji Maharaj, the sole custodian of holy mace in an exclusive interview to Excelsior from Srinagar today. He said the Chhari Mubarak performed all rituals as per routine this year also right from the Ashad Purnima and it will perform darshan at holy cave on Shravan Purnima as per tradition.
He said as usual, day -long Puja -Archana will be performed at cave shrine situated at an altitude of 14000 feet from sea level in South Kashmir district of Anantnag where Sadhus and other devotees led by him will perform special prayers to Lord Shiva to rid this world of the pandemic.
He said this year too, the Chhari Mubark will take aerial route like last year in view of the restrictions made by the authorities due to COVID and non clearance traditional Pahalgam –Chandanwari track for yatris. Click here to watch video
Mahant Ji said, he is yet undecided whether holy mace will leave for cave shrine on August 2 or August 3. In view of forecast that there will be inclement weather on August 3 then the holy mace will leave for cave shrine on August 2, he added.
Terming the Shri Amarnath Ji yatra as one of the ancient yatras in the country dating back to Purnaic period, Mahant Ji turned down the reports that the yatra was started about 150 years back as is mentioned in official records. He said even in Tareeq-e- Hassan written during the time of Maharaja Ranbir Singh it has been mentioned that the holyAmarnath yatra is one of the ancient yatras.
He said Swami Vivekananda Ji, a revolutionary monk of India has also mentioned about this yatra and termed it one of the important and ancient yatras of the country. Raja Swambi Ji a King of Kashmir who ruled the Valley 3000 years before the Christian era had also visited the holy cave and made a mention of it in his writings. This means that he had visited the cave shrine for darshan over 5000 years back, Mahant Ji added.
Mahant Ji said one of the biggest proofs about the yatra being an ancient from Puranic period is the references given in Bringehwar Mahatmaya written by Bringeshwar Rishi who visited Kashmir during Kashyap Rishi’s time and also performed darshan at the holy cave. He said Bringeshwar Rishi was the first Rishi to perform the darshan in cave shrine and he named it as Amreshwar.
He said at that time when entire Kashmir was a lake, there were three major shrines in the form of hillocks which included Harmukh, a great Hindu pilgrimage centre in Central Kashmir on right side of Srinagar- Ladakh Highway, Shiv Pad and Amreshwar now known as holy Amarnath shrine.
Mahant Ji said Bringeshwar Puran throws light on the ancient cultural history of Kashmir and it has made a detailed description about Amreshwar shrine and Himling or Shivling naturally formed there.
He said Rajtarngni written by great historian Kalhan Pandit also describes Amarnath Ji as an ancient pilgrimage centre of Hindus. He said there are 45 Shiv Dhams in Kashmir and Shri Amarnath Ji is main among them where devotees used to visit for times immemorial.
He said now this yatra has not been a matter of faith for devotees across India but all over the globe who used to visit there in lakhs every year to perform darshan and pay obeisance to Lord Shiva.
He said the True Trust founded by him has made all arrangements for the Sadhus and devotees visiting holy cave this time.